Why the Sexist Milk Campaign Is Bad for Men, Too - Ms. Magazine
Skip to content 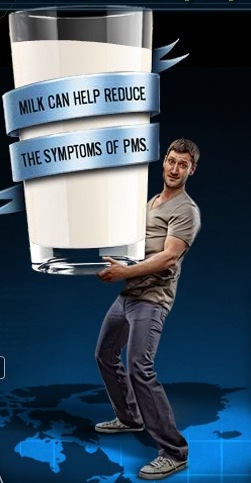 UPDATE: The milk ad website, formerly everythingidoiswrong.org, has been pulled down and traffic redirected to gotdiscussion.org. Read more here.

It’s heartening to see that my recent post on the sexist California Milk Processor Board campaign, as well as the Change.org petition protesting it, has generated so much discussion about damaging gender stereotypes in advertising. What we still need to talk about, however, is how the campaign is not just sexist against women but against men.

Sure, at first glance EverythingIDoIsWrong.org appears (and is) overwhelmingly offensive to women. But after the initial shock wears off, it’s not difficult to see the ways in which the campaign stereotypes men as well. If Milk’s women are overly emotional, irrational and angry, its men are oafish, dumb, submissive and insincere. Why else would they need pre-written apologies or a “vocabulary sensitizer?” Aren’t men intelligent and sensitive enough to know how to craft an apology or speak to an upset person on their own? Aren’t men savvy enough to recognize that this garbage heap of gender nonsense insults them as well? Yes, they are.

What’s supposed to be “funny” about the campaign is not just the joke that pre-menstrual women are psycho-bitches, but that men are idiots when it comes to emotional intelligence and completely inept at dealing with “feelings.” The strategy involves playing the stereotypes about women against the stereotypes about men so that, in the end, everybody looks stupid. Of course, the campaign’s creators want us to think that it’s all in good fun, but bolstering these negative stereotypes reinforces the idea that there are “fundamental truths” about men and women (and whatever respective planets they supposedly come from).

Reinforcing the idea that pre-menstrual women can’t function rationally is bad. Reinforcing the idea that men have the emotional depth of a teaspoon is equally bad. This kind of gender stereotyping forces men to conform to a restrictive definition of masculinity that doesn’t permit emotional expression or empathy–and it has reached unprecedented proliferation in commercial advertising spaces. Take Klondike’s “Good Listener” ad, for example, in which a man achieves “glory” (and earns a Klondike bar) by accomplishing a stunning feat: actually listening to his wife for five seconds. In another strange series of ads, rude gifts send husbands to the doghouse–literally–until they learn to buy their wives diamonds from J.C. Penney.

Not everyone buys into these stereotypes. The Good Men Foundation and its online magazine The Good Men Project, for example, are supporting organizations that help at-risk boys and fostering conversations about what it means to be a man today.  Shira Tarrant has explored the topic at Bitch magazine and in her book Men and Feminism. And there’s a fresh new blog on the topic, No, Seriously, What About Teh Menz?

So when you write the Milk Processing Board and Jeff Goodby and his firm, Goodby, Silverstein & Partners, tell them you’re pissed off not only because their campaign is sexist against women, but also because it’s sexist against men and bad for society as a whole. Sexism in America is a sickness that no amount of calcium-rich milk can cure.