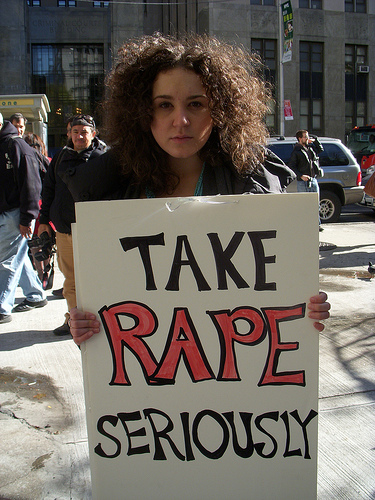 Nearly 100,000 people have signed onto the Ms. and Feminist Majority Foundation (FMF) campaign to change the FBI’s definition of “forcible” rape. After a Ms. investigative report found that the FBI’s fundamentally flawed definition excludes hundreds of thousands of rapes from the yearly Uniform Crime Report, Ms. and FMF started a Change.org petition urging the FBI to fix the outdated definition. The petition has amassed over 95,000 signatures–and counting–over the past few days.

The Feminist Majority Foundation, Ms.‘s publisher, has long been advocating for a change in the definition. In testimony before the U.S. Senate last year, FMF President and Ms. publisher Eleanor Smeal explained,

The undercounting of rape, in comparison with other major crimes, naturally reduces the allocation of resources for sexual assault enforcement. If the common perception is a problem is much smaller than it actually is, it will result inevitably in fewer resources being allocated to it.

The FBI’s annual Uniform Crime Report is used to judge police departments across the country and determine federal funding for violent crime prevention. In 2007, when the UCR listed 91,874 rapes, experts estimated that the true number could be as much as 24 times higher. In 2009, the UCR counted only 88,097 rapes.

If you haven’t yet signed the petition, you can do so here:

The campaign is spreading like wildfire, and with good reason. “If law enforcement agencies are underestimating how many rapes occur, they’re also underestimating the resources needed to prevent sexual assault and bring rapists to justice,” says Shelby Knox, Women’s Rights Director of Organizing at Change.org. “The [over 95,000] people that signed on to this campaign are sending a clear message to the FBI that rape must be taken seriously.”

If you’ve already signed the petition, help spread the word by sharing it with your friends, family and social networks, so the FBI hears the message loud and clear: Rape is rape!

The ERA Has Been Ratified, Declares New Congressional Resolution
As Congress Convenes, Over 100 Women’s Groups Urge Lawmakers to Focus on Gender Equity
‘They Made History’: Ms. Magazine’s Fave Features of Strong Black Women Over the Years