U.S. women of color have historically been the victims of forced sterilization. Some women were sterilized during Cesarean sections and never told; others were threatened with termination of welfare benefits or denial of medical care if they didn’t “consent” to the procedure; others received unnecessary hysterectomies at teaching hospitals as practice for medical residents. In the South it was such a widespread practice that it had a euphemism: a “Mississippi appendectomy.”

So it’s a startling statistic that today, some of the very populations that were subject to this abuse have high rates of voluntary sterilization. A recent report by the Urban Indian Health Institute showed that, compared to non-Hispanic white women (in gray), American Indian and Alaskan Native women (in cream) have very high rates of sterilization: 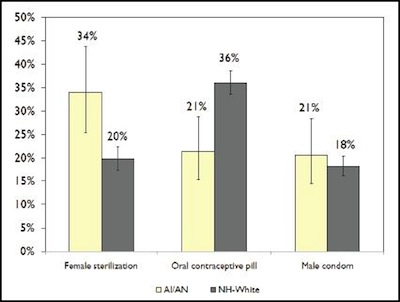 During the U.S. colonization of Puerto Rico, over one-third of all women were sterilized. And today, still, Puerto Rican women in both Puerto Rico and the U.S. have “one of the highest documented rates of sterilization in the world.” Two-thirds are sterilized before the age of 30.

Lopez found that 44 percent of the women she surveyed would not have chosen the surgery if their economic conditions were better. They wanted more children, but simply could not afford them.

They also talked about the conditions in which they lived and explained that they didn’t want to bring children into that world:

[They] talked about the burglaries, the lack of hot water in the winter and the dilapidated environment in which they live. Additionally, mothers are constantly worried about the adverse effect that the environment might have on their children. Their neighborhoods are poor with high rates of visible crime and substance abuse. Often women claimed that they were sterilized because they could not tolerate having children in such an adverse environment

Many were unaware of other contraceptive options. Few reported that their health-care providers talked with them about birth control. So, many of them felt that sterilization was the only feasible “choice.”

Lopez argues that, by contrasting the “choice” to become sterilized with the idea of forced sterilization, we overlook the fact that choices are primed by larger institutional structures and ideological messages. Reproductive freedom not only requires the ability to choose from a set of safe, effective, convenient and affordable methods of birth control developed for men and women, but also a context of equitable social, political and economic conditions that let women decide whether or not to have children, how many, and when.

This piece is cross-posted from Sociological Images.

Part of the NWLC/Planned Parenthood “We’ve Got You Covered” Birth Control Blog Carnival.