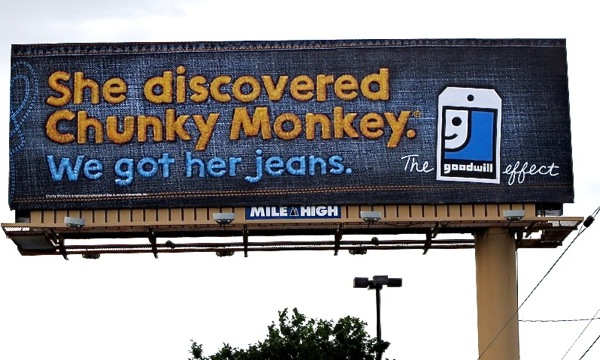 Denver’s branch of Goodwill Industries, the thrift-store chain that has always positioned itself as a helping hand to diverse communities across the U.S., recently launched a new series of advertisements with the slogan “The Goodwill Effect.” Riding my bike last week in the city, I came across the following billboard for the campaign: “She discovered Chunky Monkey. We got her jeans. The Goodwill Effect.”

I did a double take. The message is that once a woman discovered ice cream, she became too fat for her jeans?

That’s correct, confirmed Vanessa Clark, public relations specialist for Goodwill Industries of Denver, when I called her for comment. “She outgrew her jeans and she donated them to Goodwill.”

Clark told me that the campaign is a “tongue-in-cheek” effort to reach out to a younger crowd, aiming to dispel the negative impressions that thrift-store goods are well-worn or out of style and touching on the different reasons why individuals might choose to donate.

But to me, this billboard feels like a reaffirmation of the idea that women live in a pro-diet, anti-enjoyment culture of food dictatorship–a place where we cannot control ourselves, to the point that we eat so much ice cream we grow out of our jeans. And it is offensive.

Further exchanges with the retailer seemed to demonstrate a vested interest in correcting the situation. And to Goodwill’s credit, it did. The day we spoke, Clark wrote to tell me that the Denver branch of the company “decided to replace that billboard and take a different approach, because our goal is to represent Goodwill as the ultimate socially responsible retailer.”  The ad was featured on two billboards in Denver.  One billboard has been taken down already and the second ad will be removed within the next 48 hours.

The rest of the “Goodwill Effect” campaign, which emphasizes giving back to the community, has a less gendered (and to my eye, less offensive) message. The other slogans, printed on bumper stickers, include the innocuous “My other ride is a Goodwill shopping cart,” and the more iffy “The junk in this trunk is changing lives” (which strikes me as less sexist than the “Chunky Monkey” billboard, but what do you think, readers?)

I left this encounter with the strong impression that Goodwill Industries walks its talk of community support and responsiveness. Boo to a bad advertising campaign, but cheers to a fast and active fix, Goodwill.

Billboard photo by the author.

Bree Davies is a journalist, musician, lover, ally and activist from Denver, Colorado. She has a degree in journalism from Metropolitan State College and has been enamored with women's roles in music since she saw her first concert, Hole, in 1994. She has been writing since she was four years old, and playing bass guitar since she was fourteen. Bree has toured the country with her band, Night of Joy, and writes daily for Denver's local alternative publication. Not discovering her feminist voice until her mid-twenties, Bree has been catching up on speaking out ever since.