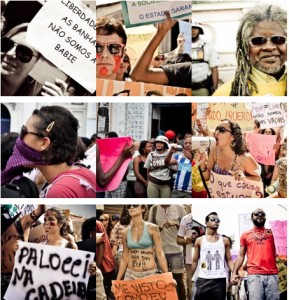 Early this summer, I was in Salvador, Bahia, Brazil, directing a five-week study-abroad program for Spelman College students when I began to hear buzz about the upcoming Marcha das Vadias, or SlutWalk.

The first SlutWalk was held in Toronto, Canada on April 3 as an outraged response to a Toronto police officer’s comment that, in order to prevent sexual assaults, “women should avoid dressing like sluts.” SlutWalk marches have since swept the globe, but media coverage has focused on those in North America, Australia and Europe, paying much less attention to the Global South. The Marcha das Vadias provides a striking example of how a transnational feminist movement can be adapted to local realities.

The march was scheduled to take place during the Bahian Independence Day parade on July 2, which combines civic and historic celebration with social protests by political parties, unions and marginalized groups. As the day approached, more and more Bahians I knew were talking excitedly about marching with the Vadias. These enthusiastic would-be participants ranged from white Brazilian university feminists to black movement activists; from devotees of the Afro-Brazilian religion of Candomblé to members of the lesbian, gay, bisexual and transgender community.

While the so-called feminists are tarting up themselves to reclaim a vile, misogynist word, perhaps the rest of us should fight to reclaim the word ‘feminism’ and return it to its roots of working for true equality.

Perhaps if Powers had seen what I witnessed in Salvador on July 2, she would have changed her tune. The signs waved by the protesters underscored what SlutWalks’ original Canadian organizers have said: that reclaiming the word “slut” is secondary to the movement’s primary goal of speaking out against violence, sexual assault and victim-blaming. Here are excerpts from a few signs that I saw: 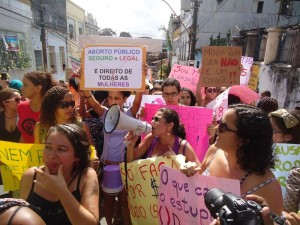 Prostitutes are also victims of rape.

The skirt is short, but it’s not for you.

If being a slut means being free, then we are all sluts.

A life without violence is a woman’s right.

We are not sex objects, we are desiring subjects.

Neither saint, nor whore. Free and the owner of my body.

We are black lesbians – we are women in the struggle.

On the Marcha das Vadias Facebook page, the organizers point out that all women have been called vadias or vagabundas (whores) at some moment, especially “when we dare to be who we are, to do what we desire. This word marks our personal histories.”

Íris Nery do Carmo, a 23-year-old Bahian sociologist and feminist activist who participated in the Marcha, told me that this event was important for Salvador because of the image of the city as “sexually liberated” and because of the

representation of the Bahian woman–the black woman in particular–as a sexual object, sold on postcards and tourist packages as part of our landscape. Given this patriarchal mentality, the high index of violence against women is not surprising. 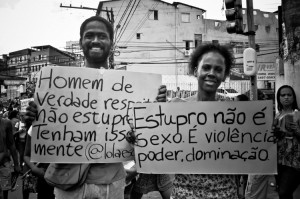 Speaking to this point, many marchers carried a poster of a black woman that read: We are owners of our voice, of our bodies, of our history. Black women: for a life without violence. The poster is from a campaign of the Project Crossroads of Rights: Race, Gender, and Confronting Violence against Black Women in Bahia, that was launched in March 2011 by black feminist sociologist and activist Vilma Reis and journalist Céres Santos of CEAFRO, an organization that promotes racial and gender equality through educational programs.

I couldn’t help but smile at the beauty and power of seeing Brazilians of diverse races, genders, classes and sexual orientations coming together under the banner of ensuring that we can all live lives free from sexual violence. You can witness that diversity in this video of the march, by Alex Oliveira:

Aline Moreira, a 24-year-old Afro-Brazilian law student at the Catholic University of Salvador and member
of the Brazilian Union of Women, commented on the SlutWalk Salvador Facebook wall the day after the event:

Congratulations to us! The march was very beautiful and representative. I was happy to see the diversity of women in our society well-represented. Artists, students, intellectuals, union organizers, doctors, domestic workers, housewives, professors, black women, white women, indigenous women, thin women, full-figured women. … It is all ours! Message given.