Why I’m Not Looking Forward To The Help - Ms. Magazine
Skip to content 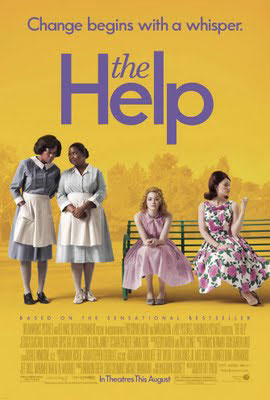 I picked up a copy of Kathryn Stockett’s bestselling novel The Help at an airport bookstore. I figured the four-hour flight to Texas would be enough time to absorb 544 plot-driven pages, and reading the novel during one of my frequent trips south seemed appropriate. For some readers, The Help calls up memories of being nurtured and cared for by black women who might have been more like mothers to them than their own white birth mothers. The story conjures for me, however, the labor–and, at times, humiliation–those domestic workers endured.

True, some of those black women also no doubt felt genuine affection for the white families they worked for. But the dictates of race and class strained those emotional ties. Black women entrusted with the care of white households and children were often still forced to enter back doors and use separate facilities. Like it or not, this vexed dynamic of interracial intimacy and dehumanization is one of the founding stories of our nation.

Many black people claim mothers, aunts and grandmothers who were (or are) maids and caregivers for white families. When I was a little girl growing up in California, I’d spend summers in Texas with my great aunt who worked for the Blankenships. Some mornings she’d pile me, sleepy-eyed, into her car and drive to one of her small town’s more affluent white neighborhoods. I’d color, draw or doze in the den that doubled as young Matthew’s playroom while my aunt would brew coffee and polish the already-clean-looking kitchen to a bleachy, scented shine. When Matthew awoke, we’d play together. Though my aunt worked for his mother, we were still too young to understand the boundaries of race and class that separated them and us. I still found it strange that my aunt called his mother Mrs. Blankenship while the younger white woman called my aunt by her first name. In a small act of rebellion, I refused to adhere to the southern custom of saying “Yes, ma’am” and “No, ma’am.”

Stockett admits in “Too Little Too Late,” her afterword to The Help, that in writing the book she was trying to understand what it was like to be a black maid in 1960s Mississippi, even though that experience is not “something any white woman on the other end of a black woman’s paycheck” can understand. And yet throughout the novel, Stockett does presume to have knowledge of black domestic workers’ inner worlds by speaking from their points-of-view (and in a black Southern dialect that has raised the ire of more than a few readers).

Unlike the book-within-a-book by her heroine, Skeeter, an aspiring writer, Stockett’s narrative doesn’t consist of stories told to her or written down for her by black housekeepers. Though she interviewed some white and black Southerners for her book, she chose to write a work of fiction rather than an ethnographic account of housekeepers’ experiences (as has been done by Tamara Mose Brown in the excellent Raising Brooklyn: Nannies, Childcare, and Caribbeans Creating Community).

Instead, The Help claims to represent an “untold story” through the genre of fiction. That’s a surprising claim considering that black women’s fiction–such as Ann Petry’s The Street, Lorraine Hansberry’s A Raisin in the Sun, Alice Childress’ Like One of the Family, Toni Morrison’s The Bluest Eye, and Jamaica Kincaid’s Lucy, among others–has long been concerned with the experiences of black domestic workers. Bringing in the history of slavery, these novels explore how the interconnected systems of sexism, racism and classism enable the exploitation of black women. They look too at the fallout: how the integrity of black families and the safety of black women domestic workers are compromised.

In contrast, though it is set in the era of civil rights, The Help softens the violence of the period with a melodramatic plot and stock characters. The black “help” are represented by the long-suffering Aibileen and sassy Minny; the white Southern women by the spunky and awkward Skeeter and arch-villain Hilly. Readers can laugh, cry and cheer as the “good” Skeeter triumphs and the “bad” Hilly gets her just desserts. The civil rights movement becomes a backdrop; the shooting of Medgar Evers and the murder of four little girls in an Alabama church bombing serve to underscore the risks the Mississippi maids are taking to tell their stories. However, the irony of Skeeter’s project–and by extension Stockett’s novel–is that the testimonies of the maids don’t improve their conditions or challenge race relations in Mississippi. Rather, they serve as a conduit through which Skeeter emerges as a feminist heroine; instead of marrying her love interest, she scores a book contract and a job in the big city.

As Hollywood has long profited from films that foreground friendships between black and white characters but manage to uphold class and racial hierarchies, the movie version of The Help will likely be as popular as the novel. Think John Stahl’s film adaptation of Fannie Hurst’s Imitation of Life, in which maid and single parent Delilah Johnson (Louise Beavers) comes up with a pancake recipe that provides wealth and independence for her white employer, single mother Bea Pullman (Claudette Colbert).

The Help is being marketed as “a human story” that affirms that we are all the same underneath; as such, it should offer the perfect summer escape for viewers who embrace the fantasy of a postracial America. Those filmgoers can tuck the history of race and class inequality safely in the past, even as the recession deepens already profound racial gaps in wealth and employment.

Promotional poster for The Help.