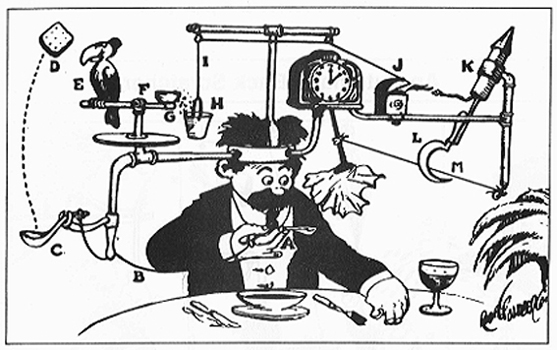 After ginning up a debt crisis, political leaders have built the budgetary equivalent of a Rube Goldberg machine. The debt ceiling has been raised at the political price of $900 billion in spending cuts over the next 10 years. And a 12-member joint congressional committee must recommend another $1.5 trillion in cuts by Thanksgiving, meaning Americans may have little to give thanks for come the holiday season.

The simple arithmetic is that $900 billion plus $1.5 trillion equals $2.4 trillion in cuts over the next decade. Friends, grab a pencil and write out this number, with zeroes, just so you can get these giant amounts into some kind of perspective. These are astronomical cuts.

The deal has mega incentives: If Congress fails to approve cuts recommended by the committee, across-the-board budget cuts—no thinking allowed—will be triggered. Ouch.

From the media brouhaha over the past few days you’d think the makeup of the Super Committee was really important. Indeed, as progressives, we might think that it’s a good thing to have relatively-kinda-sorta liberal Democratic appointees who would defend social programs, work for compromise, and help both sides collaborate.

This would be important if there were, in fact, a debt crisis. But the federal deficit is the least of our problems. There’s a jobs crisis. An infrastructure crisis. A climate crisis. Not a debt crisis.

According to the National Jobs for All Coalition there are 28.9 million Americans looking for work, working part time when they’d prefer full time, or so discouraged they’ve dropped out of the work force. This is an employment crisis. Cutting federal spending will reduce employment and make the jobs crisis worse.

This means millions more Americans—women and men; old and young; black, white, yellow, and brown; straight and gay—will have to endure at least a decade of no economic growth. And that means not enough new jobs to keep up with the young people entering the work force. With sustained mass unemployment, revenues to states and localities will continue to shrink, so critical services will be further decimated. Until, voila! Congress, doing the devil’s work, will ax the last remnants of the safety net protecting us from hunger, homelessness, poverty, and destitution in old age.

Meanwhile, just this week, a bipartisan coalition released “Falling Apart, Falling Behind” [PDF], a report indicting the U.S. infrastructure. Key findings include these facts: U.S. infrastructure has fallen from first place … to fifteenth; none of the world’s top ten ports are located in the U.S.; the U.S. has the world’s worst air traffic congestion; and, although there are more than 15,000 miles of true high-speed rail in operation around the world, essentially none of it is in the U.S. And guess what? Building this infrastructure would employ millions on federal contracts, opening up jobs in traditionally male occupations for women. (Factoid bummer of the week: there are fewer women in the construction trades today than there were 20 years ago).

And finally, only energy industry shills doubt the existence of human-induced climate change. Barely a week goes by without some catastrophic weather event. The first goal for the Environmental Protection Agency in 2011 was  “taking action on climate change and improving air quality.” The total amount budgeted for these critical actions: all of 1.13 billion dollars. Doesn’t matter who’s on the committee, there’s no way the Super Congress’s budget cuts of $2.4 trillion could possibly spare the EPA. As reported in Time, the House Republicans are hellbent on ending all environmental protections and any attempt to regulate green house gas emissions. (They would, no doubt, approve vouchers for gas masks).

If reducing the deficit and balancing the budget were actually at the heart of the alleged “budget crisis” then the members of Congress wouldn’t be avoiding a vote on the issue. But they are. The dirty work will be done behind closed doors. Politicians and media spinmeisters will continue to obscure the real causes of the deficit. A simple chart from the Center for Budget and Policy Priorities shows the component causes of the federal budget deficit. 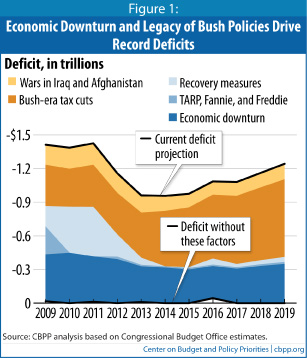 As the Center notes, “the economic downturn, President Bush’s tax cuts [for the wealthy] and the wars in Afghanistan and Iraq explain virtually the entire deficit over the next ten years.” If the tax cuts were ended (they were supposed to go away last December but White House negotiations made sure that didn’t happen) and we brought our troops home more than half the deficit would go away … without a dime of spending cuts to domestic programs!

In the opinion of this feminist economist, the Super Committee is not only a fundamentally anti-democratic policy-making process, but a red herring. Women should unite in denouncing this willfully wrong-headed, backward-looking, destructive debt deal—and call for new government spending to address the actual crises we face.

Cartoon by Rube Goldberg from a 1915 comic book, under Wikimedia Commons. Chart from the Center for Budget and Policy Priorities.