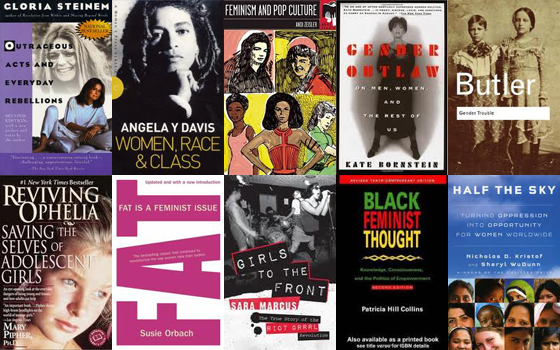 As we get closer to the top, here are career-defining works from the likes of Angela Y. Davis, Kate Bornstein, Sheryl WuDunn and Nicholas Kristof, Patricia Hill Collins, Susie Orbach and Mary Pipher. If you’ve heard of these folks, it’s probably because of the books below. If you haven’t, you have some great reading ahead! Plus landmark essay collections from Ms. cofounder Gloria Steinem and Bitch cofounder Andi Zeisler.

39. Fat Is a Feminist Issue
by Susie Orbach
Bbs Pub Corp, 1997
Going beyond self-help to consciousness-raising, Fat is a Feminist Issue shows women how they use food to fill emotional needs. According to Naomi Wolf, “Virtually all feminist debate on body image and beauty imagery owes its existence to Susie Orbach’s enduring formulation.” Find it here.

38. Girls to the Front: The True Story of the Riot Grrrl Revolution
by Sara Marcus
Harper Perennial, 2010
A definitive history of the radical counterculture movement of the ’90s, this “rockument” chronicles the rise of bands like Bikini Kill and Heavens to Betsy and the larger social movement they spurred. Find it here.

36. Gender Outlaw: On Men, Women and the Rest of Us
by Kate Bornstein
Routledge, 1994
Bornstein blends memoir with manifesto to critique the cultural construction of gender and demand acceptance for transsexual and transgender individuals. Find it here.

35. Women, Race & Class
by Angela Y. Davis
Random House, 1982
This exposé of the American women’s movement from abolition to the present reveals the racism and classism that biased many of its leaders, challenging women to come together to overcome all forms of inequality. Find it here.

34. Outrageous Acts and Everyday Rebellions
by Gloria Steinem
Henry Holt & Co., 1987
When the second edition of this essay collection was released in 1995, Steinem expressed disappointment that its accounts of sexism didn’t yet read as dated. Point taken, but as Susan Faludi says, “Gloria Steinem’s first collection of essays is–and will always be–a required feminist reader.” Find it here.

32. Half the Sky: Turning Oppression into Opportunity for Women Worldwide
by Nicholas D. Kristof and Sheryl WuDunn
Alfred A. Knopf, 2009
Pulitzer-Prize winning authors Kristof and WuDunn take the reader on a journey through Africa and Asia to reveal that a little help can go a long way toward relieving the oppression of women in the developing world. Find it here.

31. Gender Trouble: Feminism and the Subversion of Identity
by Judith Butler
Routledge, 1989
With this book, Butler revolutionized both queer and feminist theory. Her famously complex argument that sexuality and gender are performances (though not voluntary ones) was written with the aim of “increasing the possibilities for a livable life for those who live, or try to live, on the sexual margins.” Find it here.

What do you think of these selections? What are your hopefuls for the next 30? Here’s your hint for tomorrow: The oldest book on the list takes us back not one, not two, but three centuries. Have a guess?