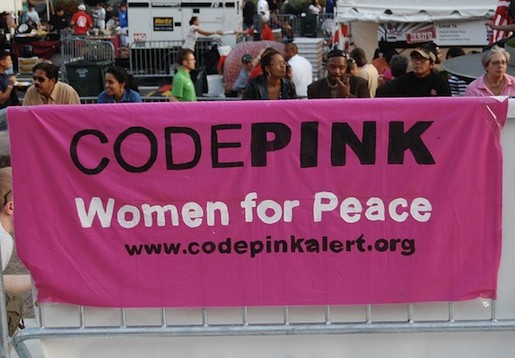 Since Occupy Wall Street began a month ago, there have been questions about how the movement should address women and minorities’ social and economic needs. Just last week on the Ms. Blog, Angi Becker Stevens called on feminists to “seize the opportunity to plug into this movement” in order to reach the movement’s “full potential.” While I can’t speak for the other Occupy protests sprouting up all over the country, I can say that women involved in the New York movement are doing just that.

For one thing, when I entered Liberty Plaza it was hard to miss Code Pink’s table directly at the front of the park. Melanie Butler, an Occupy organizer and Code Pink representative, says that women “have nearly equal representation on all the committees” at Occupy Wall Street, and although there have been some issues with gender parity, she has found the leaderless movement to be generally receptive and open to women’s opinions and voices.

Once I passed the Code Pink table, I found another largely women-run booth with information about tax reform, anti-fracking legislation and immigration rights. I spoke with Amy, one of the table’s many flier distributors, who has found the encampment to be place for all types of people “to come together and really discuss issues and connect.” As opposed to other social justice campaigns she’s worked on, she and her friends have felt comfortable expressing themselves, which “helps real dialogue happen,” she said.

Of course Liberty Plaza is not feminist utopia. From the beginning, there have been challenges to include women and minority voices in the General Assembly–the nightly meeting where protesters gather and the group debates and decides its next steps. Male speakers have dominated the General Assembly, so a breakout group called the Speak Easy Caucus was formed. It aims to provide an open space for dialogue that will embolden members to take up more vocal positions in the larger forums. The Speak Easy Caucus then spawned a Women’s Caucus, a Safer Spaces Caucus (to help address sexual harassment,) and a People of Color Caucus. Also, the people in charge of “progressive stack” (a waiting list to speak in the General Assembly that encourages women and other traditionally marginalized people to speak before men do) have been tasked with the responsibility that their lists represent a diversity of voices.

It’s unfortunate that the mainstream media has paid so little attention to women’s voices at Occupy Wall Street and has consistently chosen white males to represent the movement. While I don’t begrudge these men for talking to major news outlets–it’s great that they’re willing articulate their concerns to a wide audience–I do fault the media for consistently choosing to interview and profile people from this same demographic. The camp is so diverse in gender, race, religion and ideological affiliation that failing to highlight this diversity is a failure to fully and accurately cover the movement.

Also, what about all the famous women leaders who have come to visit the camp and show their support? Men’s visits to the camp have been consistently reported–just perform a basic internet search for Michael Moore, Russell Simmons, Kanye West, Cornel West or Chris Hedges. But what about Naomi Klein, Barbara Ehrenreich, Eve Ensler and Susan Sarandon, to name a few? While it’s amazing that all of these people have gotten behind the movement, I do think it’s telling that, again, the mainstream media chooses to focus on men. (Women got the most attention only when they were penned up and maced early in the occupation.) The challenge is not so much to harness the power of women but to make sure their actions are given visibility.

Last Saturday in Times Square, when thousands gathered to protest the ongoing wars and the corporate interests embedded in them, I noticed women directing the march. As we all chanted together, I realized that Occupy Wall Street is galvanizing because the ire is feminist, anti-colonialist, anti-racist and anti-patriarchal. Although there have been (and will be) hiccups along the way, Occupy Wall Street will only grow in numbers and support if it continues to resist a top-down message and instead capitalizes on the urgent notion that the 99 percent is made of many diverse “percents.”