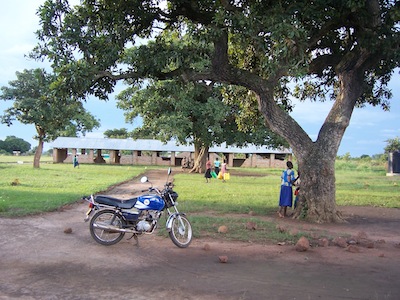 Last week, the Associated Press announced that the U.S. would be “venturing into one of Africa’s bloodiest conflicts.” That’s a theatrical way of saying that Obama is sending 100 U.S. military advisers to East Africa to counsel the Ugandan government in its fight against the Lord’s Resistance Army (LRA), a rebel group that has evaded national and international forces for over two decades. The U.S. troops will “not engage in combat, unless forced to defend themselves.”

Last month I traveled to Uganda and reported for Ms. on the aftermath of the country’s brutal, decades-long conflict with the LRA. After five years of living free of LRA attacks, the country’s north, which bore the brunt of the fighting, remains economically devastated. With little perceived chance at earning an income, girls are pressured to drop out of school early and get married. Few reach graduation. Meanwhile, the LRA remains active, though well hidden, in neighboring central African countries.

When I asked my sources in northern Uganda what they thought of Obama’s announcement, they agreed that it came as a pleasant surprise. “The involvement of U.S. army has been long overdue,” says Okweny George Ongom, director of a school in northern Uganda and an advocate for women and girls in the area.

“There is a natural revolution occurring that those in leadership position[s] must observe and realize: that both the masses and just leaders like Obama will not tolerate injustice,” says Okello Kelo Sam, the founder of Hope North, a secondary and vocational school in northern Uganda for at-risk children (many of whom were at one time abducted by the LRA). “The decision made by President Obama is very welcomed by our people.”

For me, this is one of those uncomfortable media moments, and not only because of the sensational way in which the story was reported. Responses have been divided between two overly simplistic camps: those that see the policy shift as monumentally hopeful and those who see an opportunity to criticize Obama.

Leading the latter is, not surprisingly, Rush Limbaugh, whose comments have clouded Americans’ already murky knowledge of the Ugandan conflict. Limbaugh ranted through one of his shows this week about the Obama administration’s choice to “target Christians” and “kill them.” What he ignores here: that the U.S. government has been clear that they are only sending advisers to the region, not engaging in combat and that the LRA operates under an unclear, ever-shifting mix of Christian-influenced mysticism designed to lionize its founder, Joseph Kony, rather than Christianity.

As a way of demonstrating to viewers that Obama is “sending the soldiers to fight Christians in Africa,” Limbaugh also listed some of the legitimate grievances found in LRA literature. And it’s true that the LRA does have valid concerns about the dictatorial Ugandan government, which has been found funneling international military aid money into “ghost soldiers” (deceased soldiers still on the payroll register) and has done little to support the reconstruction of the northern part of the country, where the war was waged for so long. Such atrocious abuses of power do not, however, validate the campaign of torture, rape and kidnapping waged by the LRA. One can only hope that when Limbaugh later admitted to not knowing that the LRA “is being accused of really bad stuff,” his listeners realized that his take on things is dangerously uninformed–to put it lightly.

What does all of this bode for women and girls? For the 1,100 women that are raped every day in the Congo, where the LRA now continues its assaults, this announcement is likely good news.

But for Uganda’s girls, who remain largely forgotten by their government, we can only hope that the U.S. military response will be tethered to a comprehensive rehabilitation plan that includes a meaningful look at the Ugandan government’s responsibilities. UN officials I spoke with in Uganda were frustrated with the government’s efforts to rebuild the war-torn country (or rather, the lack thereof), especially with regard to girls’ education.

Full disclosure: I lobbied on Capitol Hill for the passage of the LRA Disarmament and Northern Uganda Recovery Act, the bill (passed a year ago) that has helped us get this point, after nearly a quarter century of violence in and around Uganda. And I think Obama’s support is a step in the right direction. Still, a military presence alone is simply not enough to end this conflict and its reverb. We must demand more for the people of Uganda, and for their neighbors.

As a closing note, I implore anyone interested in getting educated about the conflict to read the comprehensive essays in the recent book The Lord’s Resistance Army: Myth and Reality. And then, please tell your government what you think.