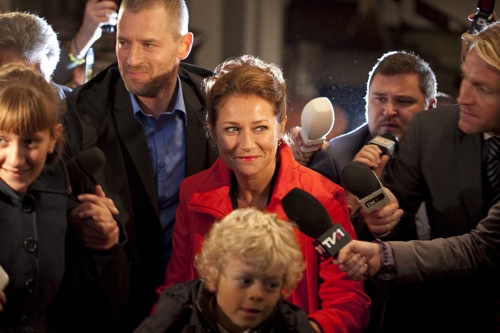 On the heels of the U.S. success of the Danish series Forbrydelsen (remade by AMC as The Killing), Danish television hit Borgen will premiere in the U.S. this weekend. Borgen is billed as a Danish cousin to The West Wing; “borgen” is both the Danish word for “government” and a nickname for the parliament building.

As a Norwegian American and feminist, I have a keen interest in Scandinavian entertainment and its relationship to gender. Politically, the proportion of Scandinavian women in decision-making positions has outstripped most of the developed world. I was curious to see how that would translate into political television.

After viewing the first episode, I agree with the West Wing comparison, but would add the great-but-short-lived Commander In Chief, starring Geena Davis as the first female U.S. president. The premise of Borgen is that 40-year-old career politician Birgitte Nyborg (Babett Knudsen) becomes the first woman Danish prime minister after a surprise election result. (Life has already imitated art: the country’s actual first woman prime minister, Helle Thorning-Schmidt, took office on October 3, one year after the show aired in Denmark.)

Nyborg’s family life figures as largely into the series as her political life does. And so does the size of her butt, which I am sorry to say shows that Danish women, too, must manage the objectifying pressure to be perfect in all ways, including physically. Just as in American TV and politics, the candidate’s body is highly scrutinized during her campaign; Nyborg’s political advisor and her entire family tease, poke fun, and cringe at her “size.” Ms. Nyborg’s ass is a normal size and the show’s scrutiny read as ludicrous–television writing at its bottommost, excuse the pun. However, while I hated that the show played the issue for cheap laughs, I did like the realistic portrayal of the double standard faced by women in politics. Men never have to ask, “Does this podium make my rear-end look large?”

A few more picky points before I get into the fact that I liked Borgen. The only two female characters over 40 were a drug-addict and a drunk. I’ll reserve judgment as to whether Danish television makes middle-aged women disappear like American television does—it’s too soon to tell from one episode.

What I liked very much about Borgen is that it assumes intelligence on the part of its viewers. It has plenty of women talking about real things, like politics, policy and ethics. How enlivening to see a screen full of women and men, working side by side! It was also refreshing to see the inner workings of an election that has more than two parties. Denmark, like other European nations, doesn’t try to boil down political parties into two bloated and often irrelevant camps that dare not take firm stands. A multi-party system acknowledges nuance far better than our dinosaur system of Republican vs. Democrat.

What made my heart sing and me long for Scandinavian political values to cross the ocean was that Birgitte Nyborg actually won the election for being honest and taking a moral stance. If you believe, as I do, that an important function of TV and movies is to engage viewers in possibly new conversations, Borgen will serve a lot of American viewers well.

The show’s real conversations occur around the private sphere as well as the public. How do two ambitious, bright people in the same household handle domestic and public life? Borgen addresses that. How does a candidate keep her soul and still win a political seat? Borgen tackles that. As we see in other shows, such as The Good Wife, TV creators seem more comfortable exploring such public/private-life conflict when the high-achieving protagonist is a woman. And that makes for better TV, since these questions are relevant to everyone.

Now that NBC has attained the rights to Borgen, it’ll remain to be seen if American audiences will respond in larger numbers to the second fictional first female head of state than they did to Geena Davis in Commander-in-Chief, a series that I grieved over when it was gone.

When I was a delegate to the 1995 United Nations Fourth World Conference on Women in Beijing, I had the opportunity to hear Vigdís Finnbogadóttir, the first democratically elected female head of state in the entire world, speak about her 16 years in office as president of Iceland. She said little boys asked her constantly, “Madame President, can boys grow up to be president, too?” Who we see in the Oval Office makes a huge symbolic and practical difference to little girls and little boys. Seeing a female president or prime minister on TV is an important step to that office being filled in reality. In Denmark, after all, it took less than a year.