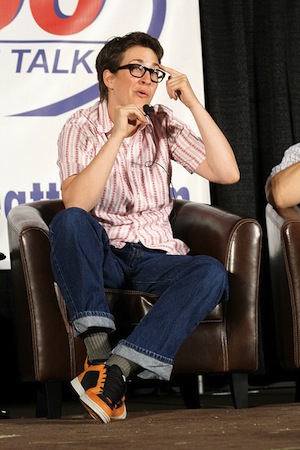 What’s sexier than a brilliant, Internet-savvy, queer, liberal prime-time news host with an Oxford University degree? Yeah, I can’t think of anything either.

Since her show on MSNBC began in 2008 (and even before that, on Air America), Rachel Maddow has been turning heads and getting people thinking. She has been able to set herself apart because she finds the story and tells it intelligently, rather than telling you how to think about it. Of her interviewees, she told Variety:

I don’t believe in humiliating people. That is not what I am there to do. I am not there to make you look bad. I am there to talk with you. You can make yourself look bad.

Her main focus on the issues themselves, rather than on sensationalism, is a relief; she cuts through the hyperbole to get at what is really important and what can be done about it. Much of that attitude, I’d like to think, comes from her scholarly background. After graduating early from Stanford with a degree in public policy, she became involved in the AIDS/HIV awareness movement that grew out of the radicalism of the 1970s, predominantly focusing on improving prison conditions for prisoners with HIV. She then went on to earn a Rhodes Scholarship and earn a DPhil in politics at Oxford (her dissertation is titled “HIV/AIDS and Health Care Reform in British and American Prisons”).

She’s covered many important stories since her start on The Rachel Maddow Show in 2008, my favorite being her interview with Pulitzer Prize-winning journalist Jose Antonio Vargas, who came out over the summer as an undocumented immigrant. The news by itself was explosive, but the manner in which she approached the subject was subtle and insightful, bringing the core issue to the front: the necessity of making undocumented immigrants visible, not so that their rights may be further denied but so that their rights may be accommodated for.

The theme of including the excluded is threaded throughout Maddow’s pieces, from her coverage of the anti-gay legislation in Uganda, to her various coverage of women’s rights (including abortion and birth-control access), to the story about the near-closure of Catherine Ferguson Academy to … shall I go on?

Not only is she smart and serious, but fun as well. Who else could get away with referencing Monty Python while talking about Griswold v. Connecticut?  Her “Moment of Geek” segment is also a fun favorite. She knows how to reach her audience, which is comprised of everyone from Oxford academics to right-winged politicians to queer student feminists like me. She has that right balance of intellect and levity that makes her show and its content approachable.

Not to mention that the format of her show emphasizes respectful, authentic dynamics between interviewer and interviewee. As she told Mother Jones,

I don’t like to set people up to have fights with each other. I don’t do multiple guests, so maybe that’s part of it … you need to be able to make a cogent point, have a story, get your joke in, get your sound bite in, and finish. The format is demanding; it’s just not generic.

Rather than juggling many balls in the air at once, her show breaks things up and slows them down, allowing for depth and breadth in a sensible balance.

What makes me glow with pride, besides having a sexy academic on prime-time television, is the fact that Maddow makes visible every evening the type of person who has been made invisible for so long: an intelligent, openly queer women with a strong, passionate voice. We need more Rachel Maddows in the world of television and radio news. And I’m sure they’re out there, watching her show and thinking the same thing.