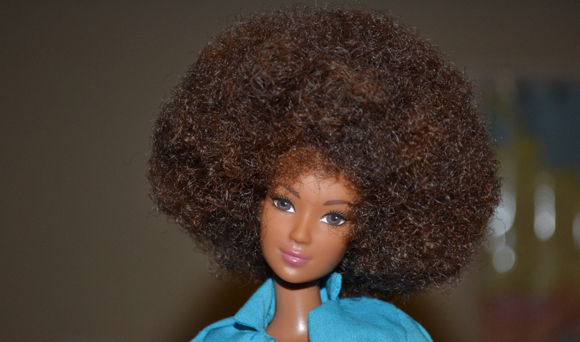 This week, a group of black women in Columbus, Ga., started a campaign to donate 40 black Barbie dolls to young black girls. And here’s the twist: Before gifting the Barbies, the women used boiling water and pipe cleaners to transform them into curly-haired “beauties.”

In my 32 years on this earth, I’ve owned a total of two black Barbie dolls: Brownie (named by me) and Christie (named by her Mattel box). Brownie and Christie gave good advice, performed medical procedures on other dolls and married white Kens (since my black “Ken” came many years later and was named Steven). They had brown cottony manes close to the texture of my own hair. After a session or two of “beauty shop,” Brownie sported a puffy mullet and Christie an afro bob, which became shorter and shorter over the years.

I don’t know whether owning black Barbies was one reason I had adequate self-esteem as a girl despite pervasive messages that black wasn’t exactly beautiful. The self-esteem-protecting potential of natural-haired Barbies appears to be the hope underlying the Georgia toy drive. “We wanted to show the girls that basically, it’s okay the way God made you,” says Jennifer Henderson, a member of the natural-hair-care meetup group Fro-lific that organized the drive.

One might assume that Fro-lific’s implied goal of teaching the girls self-love and self-acceptance should make me, a black mother of a black daughter, stand up and cheer like everyone else seems to be doing … right? But here’s the thing: As a feminist mom, I kinda hate Barbie, whatever her color. In fact, I would go so far as to say that Barbie represents everything I hate in the world: capitalism, sexism, racism, heteronormativity, white supremacy.

How does black Barbie reinforce white supremacy, you ask? Well, first, look at her facial features and body shape. Remind you of anyone? Down to every detail, black Barbie is standard-white-Barbie painted brown. I’m not suggesting Mattel add superficial “exotic” markers like full lips and a voluptuous butt. Rather, I’d echo a call made by scholar Ann Ducille in her 1994 essay “Dyes and Dolls: Multicultural Barbie and the Merchandising of Difference”:

Could any doll manufacturer or other image maker—advertising and film, say—attend to cultural, racial, and phenotypical differences without merely engaging the same simplistic big-lips/broad-hips stereotypes that make so many of us grit our (pearly white) teeth? What would it take to produce a line of doll that would more fully reflect the wide variety of sizes, shapes, colors, hairstyles, occupations, abilities, and disabilities that African Americans—like all people—come in?

These are all questions we–and Fro-lific–should think about if we’re giving Barbies (nappy or not) to kids. Barbie may be too pervasive to ignore, but at least the dolls can be a starting point for important discussions about black girlhood. Hell, about girlhood, for that matter. Can we question Barbie’s big breasts and tiny waist as markers of True Womanhood? Why is Ken Barbie’s significant other? Why do these black Barbies have to wear Jay- Z’s “Rocawear” clothing line?

If you’re looking to empower girls, there are non-Barbie gifts better suited to the task. Various other dolls on the market can help kids explore racial and ethnic diversity without the toxicity. And one way I consciously empower my own curly-haired kid is to read children’s books with her about self-acceptance and self-love: Happy to Be Nappy by bell hooks, I Love My Hair by Natasha Anastasia Tarpley and The Colors of Us by Karen Katz are three of my favorites. These books do not reduce race to skin color or other stereotypical markers, and they let me and my daughter bond by relating the plotlines and pictures to our lived experiences.

Barbie’s not going anywhere—I’ve more or less accepted this. In fact, my kid has several Barbie dolls of varying shades and with varying hair textures (birthday presents from folks who didn’t get the feminist-mom memo). My daughter knows how I feel about Barbies, and she understands that I respect and accept her decision to play with them.

What I haven’t accepted is teaching empowerment to girls through Barbie dolls. Because black girls rock, and they deserve more.