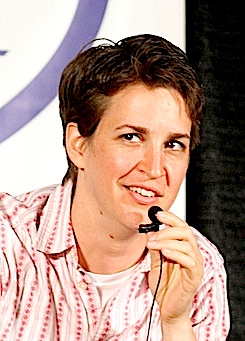 Local reporting from regions around the globe is absolutely essential. And, with the rise of blogs and social media, increasing power resides in the voices of independent writers who have the courage to speak their minds.

However, mainstream media still has incredible reach and influence; and the sad truth is that women and people of color are underrepresented in almost all forms of mainstream journalism, be it print, broadcast or web. This is especially true in one of the most influential mediums of opinion journalism, TV punditry, making feminist and intersectional perspectives the exception there rather than the rule.

But today, instead of dwelling on the negative, I want to take a little time to celebrate the fact that there are a few tremendously popular TV personalities–each with loyal viewerships in the millions–who consistently report on topics that affect the lives of women and girls.

Rachel Maddow‘s instant televisual success, back when her MSNBC weeknight program The Rachel Maddow Show first aired in the fall of 2008, seemed to surprise even her. Almost four years later, she’s still making waves. She’s erudite, ardently feminist, openly lesbian and certainly the only person on cable news who can pull off those trademark black-rimmed glasses–and audiences love her. Maddow has spent large segments of her programming reporting on stories such as Dr. George Tiller’s murder and the repeal of Don’t Ask, Don’t Tell. She’s also given one of the best contemporary definitions of feminism I’ve read, in a 2010 interview with Feministing:

Feminism is itself a challenge. Feminism is a challenge to the way things are in the world. It is by definition an oppositional movement, because it’s trying to accomplish something. I’ve never felt like feminism was a consciousness-raising effort in isolation. Everything about feminism is about getting something in the world to get better for women, and to get the world to be less stupid on gender bifurcation terms. […] I don’t think of it as a competition; there’s no winning. In feminism, you’re always trying to make stuff better. It’s opposition to which you cannot attribute a tally.

And if you like Rachel Maddow, there’s also a new potential power player in town: Melissa Harris-Perry, whose weekend MSNBC show just began airing in mid-February. A professor of political science at Tulane University, Harris-Perry is author of the book Sister Citizen: Shame, Stereotypes and Black Women in American and, now, the first African American woman to have a solo gig as the host of an hour-long cable news program. I can’t wait to keep watching Harris-Perry’s journey as she ventures into this newest media format.

See Melissa here, injecting some much-needed sense into the manufactured debate over a hug between two black men:

Lastly, as a footnote, let me add a shout out to Jon Stewart and his cadre of clever writers and correspondents (not that they need my endorsement). Even though The Daily Show is a well-established “fake” news program that plays for laughs, the show still reports on serious issues and has done an admirable job over the years, and especially recently, looking at the world through a feminist lens. Take, for example, correspondent Samantha Bee’s send-up [Trigger warning] of Fox News analyst Liz Trotta’s absurd claim that women in the military should expect to be raped (and that it’s feminism’s fault!) or the program’s hilarious recent spoof of the all-male Capitol Hill Birth Control panel. Not to mention that Stewart also had Planned Parenthood President Cecile Richards on the show just this past week.

Grassroots organizations and local activism are tremendously important; however, one of the ways smaller news stories and regional initiatives gain national or even global traction is when big-name pundits bring them into the mainstream, getting a step closer to inspiring the average viewer–who may not be tuned in to feminist concerns–to take action or, at least, take notice.

Part Twelve in a Women’s History Month series celebrating organizations and ideas that represent the future of feminism.