The Future of Feminism is Now! - Ms. Magazine
Skip to content

After 30 days, the time has come for the final “Future of Feminism” post. As I think is fairly obvious from the variety of topics this month, there’s no way to quickly sum up the future of feminism. Feminism is a many-splendored thing, embracing, supporting and advocating for people in America and across the globe. Instead of trying to encompass all of feminism’s future–a thankfully impossible task!–I’m treating today’s entry like the others, simply profiling two more important actions/organizations.

Nike’s Girl Effect campaign has been around for several years with its powerful, typographical videos that explain how small changes can help save and improve the lives of girls and women in poverty-stricken nations. While things aren’t quite as simple as the videos suggest–reducing the actual economic situation and its gendered implications to clever graphics and simple message–there’s something to be said for a campaign so incisive that it can inspire hope and a wish for change:

Women LEAD is just one example of an organization that is trying to inspire this kind of change, helping girls and women on the ground in Nepal with a “youth-driven and youth-led” focus. Co-founded in 2010 by Claire Charamnac and Claire Naylor, both in their early 20s (Naylor having grown up in Nepal), Women LEAD is a great example of how one good idea can turn into an initiative with the potential to help hundreds, if not thousands, of girls and women. According to Charamnac,

Across the world, and in Nepal, adolescent girls are an underserved population. While education for women is the most important intervention in development, it needs to be paired with economic and political empowerment. Less than two cents of every development dollar goes to girls and nine of 10 youth programs are aimed at boys. Many programs focus on primary and secondary education for girls, but very few (around 30 around the world, in our count) focus specifically on empowering adolescent girls to be leaders.

That’s where Women LEAD comes in, centering its efforts on leadership development for high school students. The organization’s initiatives include a leadership institute, an internship program and an entrepreneurship program. Women LEAD also keeps track of its graduates’ progress after they take part in the program. Says Charamnac,

Participation in the program helps young women gain a deeper understanding of the key issues facing their communities and nation. It nurtures their civic and political awareness and activism.

LEAD alumna Sharmila says, “Before [the program], I never felt like I could lead things, but now I feel like I can lead anything at any time,” while alumna Aishwarya acknowledges how her sense of self-confidence has grown: “I realized I can have so much influence over others and that my knowledge increases as I share it.”

Women LEAD certainly isn’t the only organization out there supporting and encouraging women and girls around the globe. But it’s representative of the myriad other amazing global and national organizations I haven’t had the space to feature.  If nothing else, Women LEAD and the many other programs, individuals and ideas I’ve featured this month prove that even one person with a dream can make a difference–and that feminism really is for everyone.

Part thirty-one (the final installment) in a Women’s History Month series celebrating organizations and ideas that represent the future of feminism. 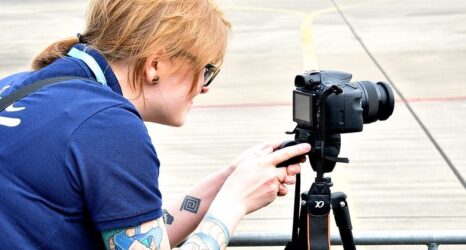 Future of Feminism: Girls and Women, Don’t Be Camera-Shy!