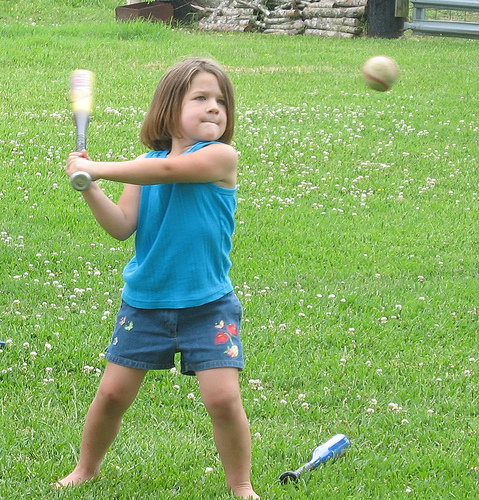 I’m not much of a sports fan, but I can certainly appreciate the strength, time and sweat that goes into the training of a top athlete. Also, it’s hard to miss that in the hubbub around March Madness, women’s college basketball, despite its long history of stunning athleticism, is yet again being largely ignored in the media–or, at the very least, not receiving anywhere near the representation that men’s basketball does.

Contending with this issue of representation is one of the main goals of the Women Talk Sports Network, which aggregates blog posts and other online discussions of women athletes. The site also includes a directory of “female professional athletes,” with more than 1,000 names and counting. That certainly beats the occasional profiles you’ll find on top sports networks like ESPN or in Sports Illustrated. (On a side note, it’s worth mentioning that ESPN has had a blog dedicated solely to women’s sports since 2010, although their “regular” content is still largely male-dominated.)

While the passing of Title IX in 1972 did much to encourage and support girls and women who wanted to take part in sports, there are still many prejudices with which women have to contend if they’re interested in sports–from automatic assumptions of weakness or inability to assertions like, “Oh, you’re pretty good for a girl.” These stereotypes, combined with the fact that women’s sports are still often thought of as less interesting/important/worthy/difficult than men’s sports mean that young girls need reassurance that being good at sports has absolutely nothing to do with sex or gender. See the UN’s 2007 report, “Women, gender equality and sport” for more on the benefits and stumbling blocks for women athletes.

Supporting girl and women athletes is the central focus of long-standing organizations such as the Women’s Sports Foundation, the National Association for Girls and Women in Sport (NAGWS), as well as newer programs such as Girls on the Run International, which has local and regional branches and “combines interactive curriculum and running to inspire self-respect and healthy lifestyles in preteen girls.” Their 12-week programs culminate in a 5K run.

Initiatives like these are still very much necessary, as even recent studies–such as the Girl Scout Research Council’s 2006 report on “healthy living”–indicate that “the more physically active girls are, the greater their self-esteem and the more satisfied they are with their weight, regardless of how much they weigh.” That report also shows that girls “need access to more opportunities for informal, less competitive physical activities in safe environments where they do not feel self-conscious about their looks or ability.”

Since I’m not a sports buff myself, I could use your help, Ms. readers. What other organizations do you know that encourage, advocate and support women and girls in sports? Leave recommendations in the comments!

Part Nineteen in a Women’s History Month series celebrating organizations and ideas that represent the future of feminism.

Photo by Flickr user millicent_bystander under license from Creative Commons 2.0