The Stories of "Mad Women" - Ms. Magazine
Skip to content 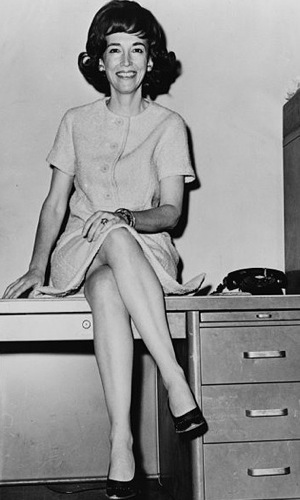 There’s a moment in an episode of Mad Men last season when Don Draper’s newest secretary, Megan Calvet, sidles up to him, bats her eyes, and admits that she’d like “to do what you do or what Miss Olson does.”

For a moment, it seems like a bold move–a woman at the show’s fictional advertising agency claiming she’d like to be, not just do, the boss!–but before you can say “Sterling Cooper Draper Pryce,” they’re rolling around on Don’s office couch. Also rolling were the eyes of fans at Megan’s misapprehension that secretary-turned-copywriter Peggy Olson slept her way to the top (not to mention Don’s questionable judgment in bedding his secretary). Megan was right about one thing, however: Copywriting was a reliable way for women to get ahead in the advertising industry long before 70s feminism helped open a wide range of professions to women.

By 1964, the year in which the last season of Mad Men took place, women had been involved in American advertising for generations. Mathilde C. Weil opened the M.C. Weil Agency in 1880. Helen Lansdowne was an experienced copywriter when Stanley Resor of the J. Walter Thompson agency hired her in 1907. She took over the Woodbury Facial Soap account in 1910 and conceived the campaign “A Skin You Love to Touch,” featuring illustrations of men chastely touching women that are widely considered to be the first use of sex appeal in advertising. Eight years after the campaign was launched, sales had increased 1000 percent. By that time, Helen Lansdowne had married Stanley Resor, and was in charge of JWT’s all-female Women’s Editorial Department. Ms. Resor and her team were wildly successful: In 1918, they were responsible for over half of JWT’s billings.

The Women’s Editorial Department was comprised of talented professionals, but part of the reason copywriters succeeded at a time when women were barred from other professions was the belief that their gender gave them an innate knowledge of how to sell to other women. As author Ann Rosenblatt summed up in The Ambitious Woman in Business (1916):

Woman’s native knowledge of how to appeal to consumers, a woman’s better knowledge of merchandise, her natural talkativeness which makes her a better descriptive writer than a man, all develop what one advertising expert calls a ‘natural-born copy-writer.’

(For the era’s Peggy Olsons, Rosenblatt noted that a stenographer working in an ad agency was at a “special advantage” for promotion to a copywriter position, as “advertising plans, ‘copy,’ and correspondence about rates, will come to her and give her a daily education.”)

Being “natural” copywriters did not, of course, translate into prestige positions. Advertising maven Bernice Fitz-Gibbons acknowledged the discrimination faced by women executives in The New York Times in 1956:

Now, let’s get this clear. Women have always worked. And the men have always warmly approved. And the harder and grubbier and dirtier the work, and the longer the hours, and the lower the pay, and the grimier the environment—the more warmly and heartily have the men approved. It is only since some of the girls began to climb . . . into the Chanel and Dior suits and onto the five-figure payroll and into the corner office with the broadloomed floor that the boys have gone in for headshakings and mutterings and hues and cries and anguished plaints . . . about women’s place being in the home.

These are excellent words for Peggy to keep in mind as season five of Mad Men opens. Perhaps even more to the point is the example of former copywriter Mary Wells Lawrence, who, after being promised the presidency of a new agency in the 1960s, was denied the position because the world wasn’t “ready for a woman president” and it would “limit the exciting growth” of the agency if it was granted to her. Then again, Mad Men creator Matthew Weiner apparently based Peggy’s career trajectory at least partially upon that of secretary-turned-copywriter Helen Gurley Brown, who went on to head Cosmopolitan for 32 years. A fan can always hope that kind of meteoric success is in Peggy’s future, too.

A mild-mannered civil-servant by day, Lynn Peril's most recent book is Swimming in the Steno Pool: A Retro Guide to Making It in the Office (W.W. Norton, 2010). Her column, "The Museum of Femoribilia" appears in Bust Magazine. She contributes to Hilobrow.com . She lives in Oakland, California, with her husband and two cats.