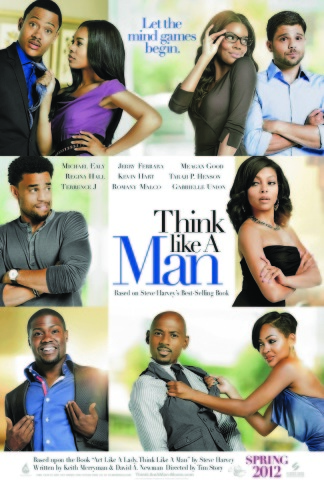 Steve Harvey is convinced you could use a few lessons in being “a lady.” So he says in his relationship advice tome, Act Like a Lady; Think Like a Man, in a chapter titled “Strong, Independent–And Lonely–Women.” Ladies are those who let men take the lead in picking a dinner spot. They don’t ask a date in for a nightcap until he has earned “the cookie” (i.e. sex) after a 90-day probation period. Ladies do not fix household items or mow the lawn. But “don’t be afraid to make a meal or two–the kitchen is both your and his friend.”

Though the comedian and radio personality avoids mentioning race explicitly in the book, it has been targeted to his largely African American fan base and. this week. debuts on the big screen as Think Like a Man, featuring a heavy-hitting black cast including Gabrielle Union, Kevin Hart and Chris Brown. Harvey’s work is but the latest in a narrative that focuses on single black women and the alleged missteps that keep them from marrying, and it is emblematic of the sexist and racist critique and regressive advice bombarding black women in the era of the “black marriage crisis.”

According to a 2011 report by the Pew Research Center [PDF], barely half of U.S. adults are married–a record low. (In 1960, 72 percent of all adults were married; today, just 51 percent are.) And Americans are not alone. The role of marriage is evolving all over the world. Nevertheless, much ado is made of the fact that black Americans marry at lower rates than their white counterparts. According to 2010 census data, 47 percent of the black population age 15 and older have never been married, compared to about 26 percent of white Americans.

We are told this is cause for alarm–that the dearth of “strong black families” is to blame for poverty, high incarceration rates, poor educational performance by black children and a longer litany of ills. The media has embraced this notion of crisis, but their focus isn’t so much the not-marrying of black people, but the not-marrying of black women. It is rare coverage that does not turn on the fact that black women are about half as likely to marry as their white counterparts. Experts offer a variety of explanations for this gap, including the lasting legacy of slavery; high incarceration rates of black males; demographics (there are simply more American black women than men); and the success gap: Black women outnumber black men in higher education more than 2 to 1, which often creates a wedge of opportunity and class.

But data reveal black men to be as uncoupled as their female counterparts and most black women do wed (the percentage of black women over 35 who have never married is less than 39 percent); nevertheless, black women are singled out by the media to be pitied and blamed for their marital status. There has emerged a sort of what’s-wrong-with-sisters-and-why-aren’t-they-married industrial complex.

In 2009, ABC News’ Nightline explored the phenomena of unmarried black women with the segment “Single, Black, Female—And Plenty of Company.” The following year, the program hosted a panel discussion to answer the question, “Why Can’t a Successful Black Woman Find a Man?” CNN has also fretted about the issue, wondering in 2010 whether black churches or single mothers are to blame for rampant black female singleness, and in 2011 whether a dearth of good black men is the problem and whether black women should give up on their male counterparts altogether.

Harvey’s bestseller is but one of a glut of books aimed at setting black women on the right course. NPR contributor Jimi Izrael names the problem plaguing black women “the Denzel Principle” in his 2010 book by the same name. Black women have standards that are just too high, argues Izrael. They expect partners on a par with actor Denzel Washington or President Barack Obama. In his 2011 book, Is Marriage for White People?, Stanford Law School professor Ralph Richard Banks suggests that black women date nonblack men to level the romantic playing field.

It has also become de rigueur for R&B artists to weigh in on love and marriage during media tours. In a 2011 video interview with gossip site NecoleBitchie.com, actor and crooner Tyrese warned black women not to “independent your way into loneliness.” Barely a month later, R&B singer Robin Thicke weighed in on the black marriage question in an Essence interview, saying, “Maybe the women have to take better care of their men. Maybe you’re being too stubborn. Maybe you’re not saying you’re sorry. You have to take good care of him, too. You have to give love to get love.”

Maybe black women want too much. Maybe they don’t know how to treat men or choose them. Maybe they are too independent. Surely there must be something wrong with them if they are not being chosen as wives. The media’s eagerness to abet this narrative is as frustrating as society’s willingness to digest it.

The message reveals a patriarchal view of male/female relationships that positions women as objects of conquest rather than agents who make their own choices. Women should bend themselves to be more attractive to men; they should be less–less educated, less independent, less discerning, less themselves. While it is not surprising that many of the most prominent voices on the issue are not women, but men, the hyper-focus on black women’s marital status has its roots in a particular intersection of sexism and racism. Behind the relationship “advice” is the specter of Sapphire–the stereotype of the black woman as unfeminine, emasculating and unattractive–named for an overbearing character on Amos ‘n’ Andy. That black women are single in large numbers, that they are advancing in education and careers, that they head so many households, that they are independent is deemed proof of their deficiency as women. The trumpeting of statistics and media bias also creates a narrowed picture of black womanhood, effectively erasing married women, women who don’t wish to marry and queer women.

All this hand-wringing misses the point. What we should be focusing on–no matter what race–is how marriage’s place in our culture is shifting and how that shift might affect public policy and gender roles. We miss an opportunity to discuss how we can remake marriage for a new century, just as gay couples have been doing, or learn to live without it as the centerpiece of our society. We miss a chance to talk about solving the success gap or reforming the criminal-justice system. Instead we fret about black women and encourage them to make concessions–to lower their standards, to give up claims on equality, to blame their faiths and their single mothers–a position that moves no one closer to healthy and successful relationships. That’s the real crisis.

Reprinted from the Winter 2012 issue of Ms. To have this issue delivered straight to your door, join the Ms. Community.