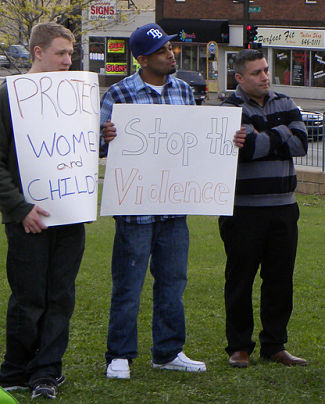 Need another reason to support Violence Against Women Act (VAWA) reauthorization? Concerned Women for America (CWA) is against it.

Yes, the same group that opposes abortion and most forms of birth control [PDF], as well as all LGBT rights: marriage, civil unions, domestic partnerships, adoption and hate crimes protection. For their “dubious” anti-gay statements–including equating homosexuality with pedophilia–the Southern Poverty Law Center classifies them as a hate group.

CWA not only opposes VAWA reauthorization with the claim that is a waste of money (calling it a “boondoggle for feminists”), but also because it extends protections to lesbian victims of violence and thus, CWA says, embraces “the homosexual agenda.”

There are plenty of far-fetched anti-VAWA arguments already out there. So-called “men’s rights” groups (MRAs) have sought to block VAWA by labeling it a men-vs.-women issue. They say the name of the Act discriminates against men. Ironically, VAWA has always served victims of all genders–so these groups appear to be are more intent on attacking feminism than on truly helping male victims (as I’ve written previously). MRAs claim to speak for all men, but thousands of other men have rallied to VAWA’s defense by signing pro-VAWA petitions.

But this is the first effort I’ve seen to label VAWA a gay vs. straight issue. And it’s a dangerous tactic: The Boston-based group The Network/La Red estimates that 25-33 percent of LGBTQ people are abused by a partner. LGBTQ victims of violence suffer at the hands of the perpetrator and then suffer again from a culture of silence around LGBTQ domestic abuse. Fear of being outed in a homophobic, heterosexist society leads victims to underreport the crime. Now Concerned Women for American wants to contribute to that silencing.

These tactics don’t seem to be working. Groups pushing for VAWA reauthorization stand firm in their support of extending protection to LGBTQ, Native and immigrant victims of violence. In turn, these groups (the National Coalition Against Domestic Violence, the National Network to End Domestic Violence, Break the Cycle, Futures Without Violence, NOW, the Feminist Majority Foundation and others) deserve our support.  So do groups who provide services to victims of violence from the LGBTQ community: the Network/La Red, the Survivor Project, the Gay Men’s Domestic Violence Project, Community United Against Violence,  and the Northwest Network. The LGBTQ rights group Human Rights Campaign today started its own pro-VAWA petition.

Photo is from Flickr user Fibonacci Blue under Creative Commons 3.0.