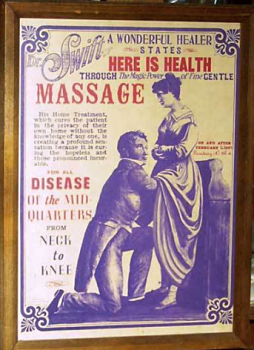 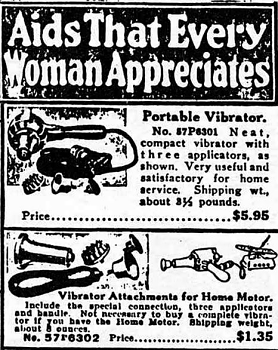 Vibrators weren’t available for home use until about 1899–if you wanted to use one before that, you had to see your doctor, and it usually cost about $2 at the time. And they weren’t advertised until 1904, when they started popping up in women’s periodicals, with such taglines as “Vibrate your body and make it well,” “Take the edge off things,” “Nature’s own cure-all” and “Magic power… will make you feel like a new person.” These ads made no mention of sex, orgasms, or even hysteria–the so-called “disease” for which vibrators were the purported cure. By 1918, the vibrator was available in the Sears, Roebuck catalog to make any housewife happy–a bargain at $6. By 1920, more than 50 different kinds had been invented, according to Rachel Maines, author of The Technology of Orgasm. 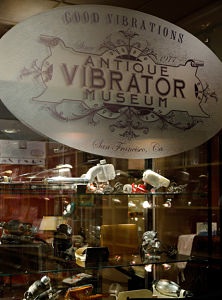 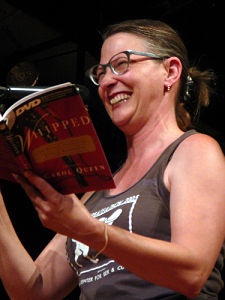 “It was a big deal,” said Good Vibrations sexologist Carol Queen. “People could talk about sex toys and have a really honest conversation. It made it possible to say, ‘Yes, I have one.’ And I don’t think the Rabbit Pearl would have been as popular if not for [SATC].”

Sales skyrocketed, and the vibrator was officially mainstream. Gil Grissom could find one in a dishwasher on CSI and Buster could use a cleaning robot in bed for comedy’s sake on Arrested Development. Indie films continued to be more explicit in the 2000s–Shinya Tsukamoto’s A Snake in June, when Rinko uses one for a voyeuristic stalker; Michael Winterbottom’s 9 Songs, when Lisa uses one after getting a table-dance–but creative substitutes allowed bigger-release films to be more stimulating. Elizabeth Banks in The 40-Year Virgin uses a showerhead to “warm up” for Steve Carell (and then Seth Rogen). Parker Posey uses her vibrating cell phone in both Fay Grim and The Oh in Ohio–which leads her into a sex shop as part of her exploration of sexual empowerment. Alice and Dana on season two of The L Word went sex toy shopping as well–and like the girls on Sex and the City, learn way more about their options than they had ever considered. Of course, by the next episode, they also learn that it’s hard to travel with such toys–and it can be embarrassing to have airport security hold up your vibrators, dildos, and nipple clamps for all the world to see. “You can’t take these on the plane, ladies,” they’re told. “You should know better than that.” (It’s a little more acceptable now).

The 2000s also saw this idea embraced on TV. 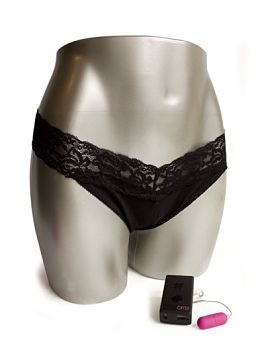 Charlotte is giving vibrators away by season three of Private Practice–the Aphrodite, to be precise, from Dr. Laura Berman’s line of sex toys. Peggy on Mad Men gets a little vibe action in a 2007 episode when Don Draper assigns her the “Electrosizer” to try out for an ad campaign. An early predecessor to vibrating panties, it’s a girdle that’s supposed to promote weight loss, but she discovers that its arousing capacity is “probably unrelated,” so she pitches the ad line: “You’ll love the way it makes you feel.” The men are confused, so Don explains, “It provides the pleasure of a man, without the man.” Even Kristen Wiig got some vibe time this month before leaving Saturday Night Live, during a Mother’s Day skit in which she is interrupted while reading 50 Shades of Grey. Of course, the hubby and kids walk in to surprise her with breakfast in bed. “Get out!” she tells them. “Look, a microphone!” one of the kids exclaim during a family photo.