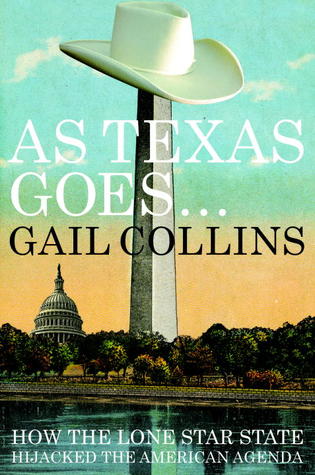 If you know that Mitt Romney once drove to Canada with his dog strapped to the roof of his car in a crate, it’s probably because you read Gail Collins’ regular column in The New York Times. She’s mentioned it in more than 60 pieces, and whenever she wickedly weaves it into a story I laugh out loud.

Her lively wit makes her new book, As Texas Goes … How the Lone Star State Hijacked the American Agenda, funny-but-scary. Collins pictures a state populated by politicians puffed up with self-regard, convinced of the righteousness of their causes, determined to impose their ignorance on the rest of us and either oblivious or hostile to reality.

Collins pays attention to every detail. Each chapter makes a distinct and convincing case for her contention that Texas has hijacked the American agenda. The book is like a pointillist canvas: When you step back from it, you clearly see the big picture. We see how the Lone Star State’s influence on American public policy has become vast, far-reaching and quite frightening.

We meet an assortment of characters in Collins’ portrait of Texas, including some pretty dim bulbs, shady characters and political operatives whose partisan wrangling would even shock Machiavelli. Then there’s the passel of highly influential politicians with outsized personalities who’ve represented Texas in Washington, from Presidents Johnson and two Bushes to key senators and U.S. representatives such as Phil Gramm, Dick Armey, Tom DeLay, Ron Paul, Lamar Smith, Jim Wright, Kay Bailey Hutchison, John Cornyn and Charlie Wilson. We can’t help but notice that while political egos are as large as the state, ethical growth has been stunted. Aiding and abetting some of the most loathsome creatures to walk the political landscape has been another infamous Texan: Karl Rove.

On the flip side, Texas also has given us some outstanding women, from Gov. Anne Richards to Rep. Barbara Jordan to the great columnist Molly Ivins, whose wit and laser clarity is matched by Collins’.

It’s not just politicians who’ve left black marks on the Lone Star State. Enron was a Texas company, and its leader Ken “Kenny Boy” Lay was one of George W. Bush’s buddies. Until he wasn’t. Political survival requires one to run from one’s friends at the first whiff of scandal–witness the current crop of toadies who’ve erased any mention of the reign of George W. Bush from their campaigns.

What should send chills down every parent’s spine is the realization that those heavy textbooks weighing down your kids’ backpacks are enormously influenced by the Texas State Board of Education, an outfit which essentially dictates the content of most American school books. It wouldn’t be so bad if the State Board wasn’t filled with right-wing, racist, sexist, homophobic xenophobes with an aversion to the fact-based universe. Collins reminds us that among the many loopy demands made by this bunch was the edict that any mention of the “New Deal” be removed from U.S. history. Since the state buys so many books due its large population (see discussion of teen pregnancy below), textbook publishers often bend to the Texas will and gear their books toward “whatever Texas wanted.”

The distorted views on education are matched by vehement Texan climate-change deniers, who are fueled by the enormous wealth generated from oil and gas extraction. By the way, Texas produces the most greenhouse gases of any state in the nation.

As Texas Goes … How the Lone Star State Hijacked the American Agenda is a must-read for political junkies as well as anyone curious about how our politics got so crazy. At least Collins keeps us laughing through our tears.