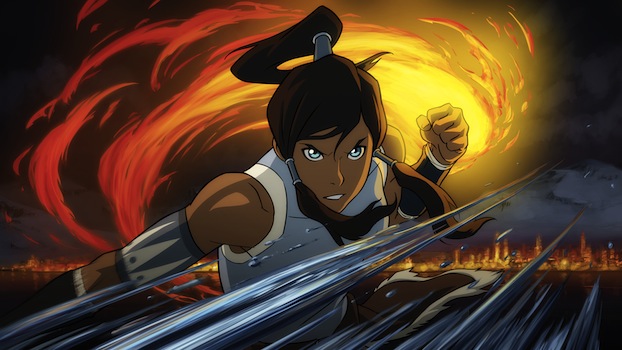 If you’re excited about Brave’s strong, independent, animated hero Merida making her way to the big screen today, then check out Nickelodeon’s animated television hero Korra, who makes her way to the little screen this Saturday for the season finale of “The Legend of Korra“. For those not already hooked on the fantasy superpowers of “bending” the four classical elements, “Korra” deserves your attention for its gender bending.

Like Brave, “The Legend of Korra”—created by two men, Michael Dante DiMartino and Bryan Konietzko–upends gendered stereotypes in its resourceful, self-reliant, fearless and complex characters. “Korra“ takes place in the same universe as the creators’ 2005-2008 series “Avatar: The Last Airbender,” a world in which a special race known as “benders” can manipulate either earth, fire, air or water. The Avatar—a being who represents the spirit of the world and is reincarnated each generation into a human body—is capable of mastering all four elements, and therefore has served as a peacekeeper throughout this universe’s history.

Having already mastered “firebending,” “earthbending” and “waterbending,” 17-year-old Avatar Korra (voiced by Janet Varney) must now learn airbending from her mentor and airbending master Tenzin (voiced by J.K. Simmons) in Republic City, a place where benders and non-benders live together in harmony.

Upon her arrival, Korra discovers that the 1920s-inspired metropolis isn’t all it’s cracked-up to be. She finds herself in the middle of a non-bender revolution instigated by a group known as “The Equalists,” led by mysterious and charismatic Amon, whose misguided utilitarian goal is to “equalize” the world for non-benders by taking away benders’ abilities.

Viewers might expect Korra to follow in the physical footsteps of her animated woman predecessors: busty, a slender hourglass figure (think Wonder Woman and Angelina Jolie’s portrayal of Lara Croft in Tomb Raider), or a team of super-tight female helpmates (turn to “Powerpuff Girls“, “Sailor Moon“ and “Totally Spies!“). Korra is large-chested, but she also has toned biceps and a broad back, boasts a fiery disposition, sports a makeup-less face and, most importantly, plays hero in her story–without a man’s assistance.

In Episode 9, after being captured by one villain and almost re-captured by another, Korra escapes on her own—with some aid from her trusty polar bear-dog—but without the help of friends who are searching for her. Though she struggles to navigate a chaotic city careening toward all-out war, resilient Korra never ceases to amaze with her passion, strength and humanity.

She isn’t the only character in this series with some serious woman-power. Earthbender and metalbender Lin Beifong, the 50-year-old chief of police in Republic City, kicks just as much butt as Korra when fighting the rebellion and protecting civilians. Even Korra’s non-bending ally Asami Sato, for all of the emphasis on her physical appearance (she fills the archetypal “pretty girl” spot), plays a part normally assigned to male characters: She drives a souped-up, stick-shift car, uses martial arts to fight Equalists and even deserts her own Equalist-conspirator father to help Korra and her friends.

Clearly, these women are valued for things outside of the traditional feminine script. Just listen to Korra’s two men friends, brothers Mako and Bolin, when they wax eloquent about her qualities. The younger Bolin tells Korra in Episode 5 that she is the “smartest, funniest, toughest, buff-est, most incredible-est girl in the world!” In a preview from the first episode of the two-part season finale, the elder Mako calls Korra “the most loyal, brave and selfless person [he’s] ever known.”

(See, guys? There are ways to connect with women without busting out the “beautiful” card. Not that Bolin doesn’t think Korra’s beautiful, but it’s a tertiary priority falling somewhere below strength and fun.)

There are a few cliché elements to these unconventional female characters: Lin Beifong’s martyrdom when she sacrifices her own bending to protect Tenzin and his family; Korra’s sometimes-forced attraction to Mako; Asami’s jealous-girlfriend tendencies. DiMartino and Konietzko have given their broad audience of males and females, teens and 30-somethings and kids and parents, imaginative access to a story that eclipses standard TV fare. (If you don’t believe that males watch this show, check out users AvatarJesal and Avatarinsider on YouTube; Republic City Dispatch hosts Matt, Dave and Devindra; or simply type in “Legend of Korra” on Tumblr, Facebook and more. Guys love Korra’s toughness, too.)

With Season Two in the works, and episodes featuring the creators’ commentary airing weeknights at 9 p.m. from July 9- July 20 on Nicktoons, viewers will have much more to talk about, and even more to look forward to.

The one-hour season finale of “The Legend of Korra” airs this Saturday, June 23, at 11 a.m. on Nickelodeon. All previous and forthcoming episodes of The Legend of Korra are available for free on nick.com/korra or for purchase on iTunes and Amazon.com.