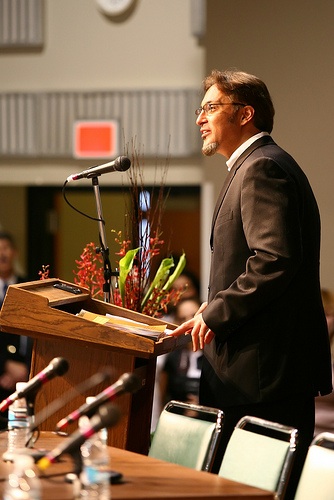 Looks like plastic bags get more respect in San Francisco than victims of domestic violence.

Ross Mirkarimi, the San Francisco police sheriff who was given three months probation for bruising his wife’s arm during a New Year’s Eve altercation, will keep his job after all.

Mirkarimi was elected to the position last fall, then suspended by Mayor Ed Lee when he pled guilty to battering his wife, Venezuelan telenova star Eliana Lopez. He was sentenced to three years of probation and heavily fined. He was also required to take counseling and parenting classes.

This wasn’t enough punishment in the eyes of the mayor, who then attempted to have Mirkarimi removed as sheriff. Lee even gave a statement before San Francisco’s ethics commission saying it would be “extremely difficult” for him to work with Mirkarimi again, which is understandable. Who wants a convicted wife beater in a city’s top law enforcement position?

Despite this, the city’s board of supervisors voted against removing the disgraced sheriff. In an official statement, Lee said he disagreed:

The facts clearly demonstrate that Ross Mirkarimi’s actions and his domestic violence-related conviction falls below the ethical conduct we expect of our elected Sheriff and constitutes official misconduct. The Board’s decision returns a convicted domestic batterer to lead the Sheriff’s Office.

The sheriff has referred to the incident with his wife as “a private matter, a family matter” to the outrage of anti-domestic violence groups. One of the supervisors who voted on Mirkarimi’s behalf, said that, while he believes domestic violence to be a serious offense, he didn’t think Mirkarimi’s actions rose to the level of misconduct.

Mirkarimi hardly isn’t the only policeman accused of domestic violence. Studies have shown that women suffer abuse in more than 40 percent of police families. The rate for U.S. women overall is 25 percent.

Yet too many people–even women–fail to take the problem seriously. When one of Mirkarimi’s supporters deliberately bumped into the arm of a victims’ advocate during the supervisors’ meeting, she spat out facetiously, “Oh, did I bruise you?”

Photo of Ross Mirkarimi courtesy of Reentry Council of SF via Creative Commons 2.0