Monkeys Aren't Too Fond of Unequal Pay, Either - Ms. Magazine
Skip to content 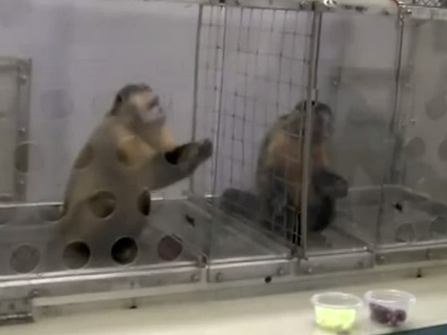 Apparently, there are a few things we can learn from our distant primate relatives.

Dutch primatologist Frans de Waal conducted a fairness experiment in which he put two Capuchin monkeys side by side and had them perform the same tasks. If both monkeys are given the same reward, a piece of cucumber, then they happily repeated their tasks over and over, de Waal found. However, when one monkey is rewarded with the same old cucumber slice and sees her fellow study participant being given a more delicious grape instead, she gets worked up into a tizzy. Watch:

“If you give them different foods, then you create inequity between them,” de Waal reports. Sound familiar? Perhaps we could learn a thing or two from how this monkey handles being treated unfairly. Watch what happens between 1:34 and 2:06 and take notes, fellow female primates. Maybe we shouldn’t be so complacent when it comes to paycheck unfairness. Who knows, maybe this is how we’ll finally close the gender-based wage gap!