To Pluck a Brown Feathered Goose
Skip to content

As a field that centers on defense and foreign relations, national security has had a long history of being predominantly male. Recent public debate on women and national security have rightfully acknowledged this problem, showing how gender biases, unequal pay and work-family life challenges have posed barriers to greater progress. However, we have also found a lack of recognition of the racial biases and barriers to inclusion that women of color must also confront to excel in the field of national security.

As an African American woman who researches Indo-Pacific Security and as an Asian American woman with no family heritage of military service who specializes in military affairs, we are seen as anomalies in the national security sector. To some degree, we are part of a larger movement that the industry is undergoing now. We have felt and continue to feel the brunt of challenges facing young women of color in our field. We also want to identify and move toward solutions to those challenges—for the sake of not only our careers, but the future of this workforce, and the world.

The immediate challenge for women of color in national security is the career pipeline itself. Women of color in this sector are competing for positions and opportunities within a very exclusive professional network. We have taken multiple unpaid, full-time internships while working part-time jobs in order to make ends meet. And for young women of color, same-gender, same-race mentorship—an invaluable asset in the rat race—is a rarity.

Networking is a a significant part of the day-to-day hustle in the national security field. Having a name or phone number of a senior-level professional acquaintance helps boost and highlights a resume—but while getting business cards and shaking hands can seem simple, networking demands a degree of relational responsibility and trust that may not be immediately available to young women of color. Having women of color mentors who are in mid-career and senior level positions are key to gaining perspective on how to navigate this field—yet those would-be mentors are few and far between.

Despite the nomination of several women to prominent national security positions over the past two decades, only two of the 15 women currently in visible senior official positions in the Department of Defense are women of color: Dana White and Kari Bingen. There are only eight women of color out of 324 service members serving at the general officer level in the armed services, and only one—Admiral Michelle Howard of the U.S. Navy—has served as a four star. (She’s also now retired.) Despite a 2015 diversity leadership report demonstrating that white, female representation at the CIA has increased, women of color have remained around 10 percent of the agency’s senior intelligence service as well as the agency population at-large; the FBI’s working population, meanwhile, is only 2.1 percent Asian women, 3.3 percent Hispanic/Latino women and 7.7 percent black women.

Washington is a city built on one’s reputation; understandably, those who are willing to help folks finds their footing in the field also want to ensure they are investing in individuals who reflect well upon themselves as well. This is what fuels a cycle of “ducks picking ducks”—people showing preference to young professionals who share backgrounds and experiences similar to their own. For an industry already lacking women of color in its more senior ranks, this dynamic can make it all the more impossible for young professional women of color to get their foot in the door—and for those who do, the scarcity of more senior women of color mentors can also lead to discouraging feelings of imposter syndrome.

Hiring practices that focus solely on diversity in numbers may begin as well-intentioned, but these efforts can backfire. Diversity initiatives that push for numbers, rather than genuine equity and inclusion, create work environments that marginalize people of color. These initiatives only attract a diverse talent pool—they don’t change organizational culture or enhance diversity of thought. And they, too, can aggravate imposter syndrome by creating a distinct feeling of isolation and tokenism while doing little to address biases. The question of “do I really belong here?” transforms into “should I belong here?” The latter question becomes even more persistent when, because your entry into national security did not follow more “traditional” paths, your peers and higher-ups ask you “why did you really end up in this field?”

An exclusive work environment further fuels imposter syndrome—and demands the constant questioning, by women of color, of their own selves and their bodies. The Perception Institute released a “Good Hair Study” earlier this year after surveying approximately 4,000 people on how they felt about black women and natural hairstyles; they found that the majority of respondents, regardless of their race, had implicit bias towards textured hair. And while the national security sector is making some progress in addressing these biases—the U.S. Army, for one, recently revised its regulations on grooming and appearance and lifted its ban on locs—perception goes beyond appearance. Women of color who are confident and assertive risk being labeled as sassy, aggressive or angry; fear of being seen in that light causes them to retract and speak less in meetings than their white and male counterparts.

These are huge challenges—but there are tangible steps that the national security sector could take collectively to create longer-term, lasting solutions. By reinstating the White House Council on Women and Girls, the White House could evaluate and implement policies that directly address these issues in federal agencies. Created under the Obama Administration to address a myriad of issues that impact women and girls, including those that occur in the workplace, the Council was mandated to “take into account the distinctive concerns” of women of color and develop an interagency plan that would assess each federal agencies progress in elevating women and girls. In the past, the council was also responsible for convening stakeholders from academia, the private sector, government entities and non-profits to deliberate on how more opportunities could be created for women and girls of color. Non-governmental organizations and think tanks could similarly consider how to balance a diverse staff at all levels.

Policy leaders have every reason to invest in young women of color who are up and coming in this field. Eliminating the barriers to greater representation for and inclusion of women of color in national security is good news for everyone: Government agencies will be more inclusive and representative of the population that they serve, and decision-making and diplomatic solutions will be enriched by a diversity of thought and experience.

About Jeesue Lee and Brittney Washington 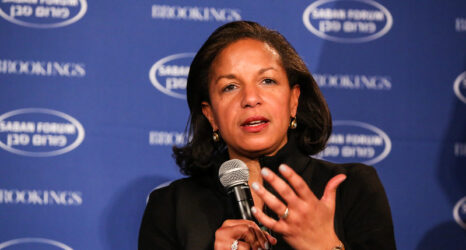 Biden Recruits Veteran Policy Adviser Susan Rice: “We All Rise or Fall Together”