Clearing Things Up: Seven Facts About Human Trafficking in the U.S. - Ms. Magazine
Skip to content

Are you in a safe place to talk?

That’s the first question I ask when someone calls the National Human Trafficking Hotline. 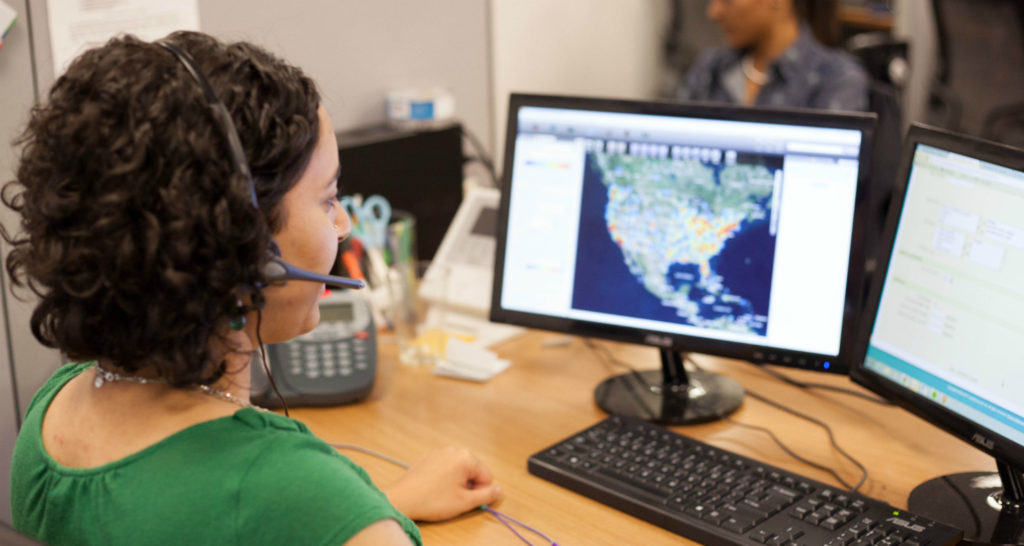 Our mission is, first and foremost, to support human trafficking victims and survivors, including people in potentially life-threatening situations—so I check to see whether someone is in immediate danger and find out how much time we can safely talk for as soon as I pick up the phone.

My next task is to determine the caller’s needs. The National Human Trafficking Hotline is a toll-free, 24/7 resource for victims and survivors. Hotline advocates like me respond to phone calls, text messages and web chats to help human trafficking survivors locate critical resources, including emergency services, through our network of organizations in the anti-trafficking community. We work closely with organizations across the U.S. so that we can provide each caller with the appropriate resources, which can range from counseling and support groups to medical care and access to legal assistance for survivors.

When people hear that I work with human trafficking victims in the United States, I usually receive one of several responses. Some people express surprise that trafficking happens in the U.S., and ask me whether anyone actually calls the National Hotline for help; other people remember hearing something about human trafficking on the news, or mention what they saw in a movie once.

I also hear many of the same things when people call in to report tips, but popular conceptions of human trafficking are frequently misleading, and we cannot fight human trafficking effectively if we are unclear about what we’re dealing with.

In order to end human trafficking, we have to confront the myths and misconceptions that surround it. Let’s start here, with these seven facts about human trafficking—and what you can do about it.

Unfortunately, people continue to experience forced labor and forced commercial sex in the U.S., even today, and the problem is also larger than you might think. The National Human Trafficking Hotline has handled more than 40,000 human trafficking cases since 2007. We received more than 6,000 tips and provided over 1,700 referrals for human trafficking in 2017, and we’re currently on track to receive even more calls from human trafficking victims and survivors this year.

Keep in mind that this data is only a reflection of the information received by the Hotline—the full scale of trafficking in the U.S. is likely much larger.

Sex trafficking refers to a type of modern slavery in which people are compelled to engage in commercial sex against their wishes. Victims of sex trafficking are controlled through force, fraud or coercion to ensure their compliance; traffickers use violence, threats, debts and false promises to control their victims and steal their profits. The settings in which sex trafficking occurs can vary widely, and include fake massage businesses, hotels and motels, city streets, truck stops, residential brothels and more.

Sex trafficking is not synonymous with commercial sex or prostitution. (It is important to note, however, that minors under the age of 18 years are considered victims of human trafficking if they are engaging in commercial sex regardless of whether force, fraud or coercion are present.)

Labor traffickers often use violence, threats and lies to control their victims and force them to work with little or no pay. Although such trafficking occurs in too many industries to list, common ones include agriculture, domestic work and traveling sales crews.

Human trafficking is sometimes associated with people locked in cages or physically restrained to prevent them from escaping, but the reality is more complex. Some human trafficking victims do not even recognize that they are victims of a crime due to misunderstanding or self-blame.

Human trafficking is a crime that can affect men, women and children from many different backgrounds. One of the few commonalities is that all victims have vulnerabilities that traffickers exploit. As a result, human trafficking can include vastly different groups, but it disproportionately affects vulnerable and marginalized populations. U.S. citizens and foreign nationals, regardless of documentation status, can fall victim to human trafficking.

Human trafficking is often confused with human smuggling, but the two are largely separate, if sometimes overlapping, categories. Human trafficking does not require transporting anyone across a border, and it happens to U.S. citizens in the cities and states where they grew up. Transporting victims to unfamiliar settings is one way traffickers might attempt to control their victims, but it is just as common for people to experience exploitation close to home.

There is no single definitive list of human trafficking indicators. The circumstances of exploitation vary for each victim, but there are some characteristics that commonly occur in certain kinds of work. This is one reason Polaris has worked to develop a typology that outlines what trafficking looks like in various industries. You can also visit “Recognize the Signs” and read our list of human trafficking red flags—the list is not exhaustive, but it does identify a variety of working conditions, victim behaviors and other signs that may indicate something is wrong.

You might notice that a housekeeper is never allowed to leave her employer’s residence by herself. Or perhaps you learn that foreign agricultural workers have had their visas and identification papers confiscated by their employer. Or maybe you encounter a massage parlor that is open at unusual hours and closely controls who can enter the building. Most of these indicators aren’t enough to prove human trafficking without additional information, but they are signs that something is potentially wrong.

If you identify any of these red flags, I encourage you to contact the National Human Trafficking Hotline at 1-888-373-7888, text us at BeFree (233733) or use our online tip reporting form. Hotline advocates have been trained to walk through situations with you and ask questions that can help identify what’s going on. We can also offer guidance on the steps a caller or a potential victim might take next. The hotline will ultimately assess the situation and then work closely with our partners in law enforcement and the rest of the anti-human trafficking community whenever possible.

I encourage you to remain alert and give us a call if you see something suspicious. Ending human trafficking will take a village—and it just might start with your call.

What Women Won: Looking Back at the Feminist Victories Across the Country in 2019