Women Who Know Their Place: Meet the New Feminists in the Senate - Ms. Magazine
Skip to content 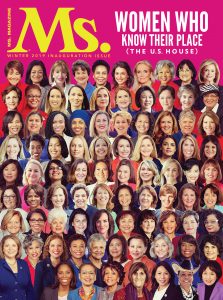 This post is excerpted from the latest issue of Ms.—our inauguration special, which introduces the new feminists in office. many of whom were sworn in today.

To meet more new feminists in town and read more from this feature, click here.

To read more from the issue, become a Ms. member today.

Undaunted by challenging an incumbent senator, first-term representative Rosen led a strong and victorious campaign against Dean Heller (R). When attacked during the campaign by her opponent for her limited political experience, Rosen fired back, telling the Las Vegas Sun she was qualified to join the U.S. Senate because she knows “that the dignity and decency of our democracy is at stake.” Nevada voters agreed.

Rosen is the grandchild of immi- grants and the first in her family to graduate from college, having put her- self through school by serving food. She chose a career in computer program- ming and software development—then, and still, a male-dominated field. She recounted to Elle that she graduated from high school in 1974 when “Ms. magazine was only just starting, and women were really feeling empowered to pursue their dreams and their careers, and I was excited to enter a new field of technology.”

Rosen left her career to take care of her parents and her in-laws when they got older, and later, as president of the largest synagogue in Nevada, Congregation Ner Tamid, she led a team in Henderson in building one of the largest H solar fields in the city. A few years after that, in 2016, she ran for the U.S. House and won her first election.

In the House, Rosen, along with 194 original cosponsors, introduced the Equality Act of 2017, which “amends the Civil Rights Act of 1964 to include sex, sexual orientation and gender identity among the prohibited categories of discrimination or segregation in places of public accommodation.” She cosponsored eight pieces of legislation that passed into law, two focused on science and education and two on preventing human trafficking. In office, she has worked to encourage early interest in STEM (science, technology, engineering and math) education for young girls. She served on the House Armed Services Committee; the House Science, Space and Technology Committee; the Sub- committee on Research and Technology; and the Subcommittee on Energy.

A year ago, we launched our campaign for U.S. Senate. Since then, I’ve traveled across AZ and heard from folks about the issues that matter most to them — issues like health care, the economy, and taking care of our veterans. Thanks for the support so far! Now let’s go win.

She launched her first campaign for public office when she was still in law school. She lost but, undiscouraged, tried again in the next election and became, at age 28, the youngest lawmaker in the state (she passed the bar exam her first month in office). After six years in the state House, she was elected to the state Senate. Early on, Sinema was known for her passionate speeches. In one memorable instance, she responded to a bill that would prevent women from selling their eggs by telling the state House’s Republican supermajority, “You keep your hands off my eggs, and I’ll keep my hands off your sperm.”

By age 36, Sinema had a master’s degree, a law degree and a Ph.D. in social work. She was also a brand-new member of the U.S. House. Sinema is Arizona’s first Democratic senator since 1988. She was the first openly bi- sexual member of the House, where she served on the Committee on Financial Services—now she’s the first in the Senate. She’s a passionate proponent of public education, affordable health care, equal pay, women’s rights and permanent protection for recipients of the Deferred Action for Childhood Arrivals (DACA) program. As she told supporters after her vic- tory: “[N]ow it’s time to get to work.”

All over Minnesota. We win by knocking on doors. We win by making phone calls. We win by talking to our family and friends. We win by getting people out to vote. It takes every single one of us and I couldn’t be more proud of the hundreds of folks helping to make that happen.

Smith is a former small-business owner with an MBA from Dartmouth College. She worked as a top leader for Planned Parenthood of Minnesota, North Dakota and South Dakota, and she believes strongly in a woman’s right to an abortion. She was former Sen. and Vice President Walter Mondale’s campaign manager, and chief of staff for Gov. Dayton. In 2014, at Dayton’s request, Smith ran and won for lieutenant governor and remained in that post until joining the Senate. She told a local TV station that her appointment to the Senate is “an honor I never anticipated… my life hit a fork just about a year ago… I feel so grateful that I can do this work.”