“Now is not the time to overturn the U.S. Constitution in the middle of a pandemic,” she said.

Following a round of intense negotiations, Ohio clinics remain open.

The clinics are closely complying with current state recommended medical guidelines for all procedures—including taking steps to reduce the use of personal protective equipment (PPE), one of Yost’s cited concerns about abortions continuing amidst the pandemic.

Planned Parent of Greater Ohio said in a March 24 statement:

“Our doors remain open. There has been some confusion in coverage over abortion access during the COVID-19 pandemic. Planned Parenthood is in full compliance with the Ohio Department of Health orders and continues to operate while responsibly using personal protective equipment during this pandemic crisis.

“Abortion is a time-sensitive and essential medical service. Ohioans can continue to rely on us for safe, legal, surgical abortions.”

Galonski and other abortion advocates maintain that unlike elective surgeries, access to safe reproductive care can’t be delayed. They say abortions are time-sensitive for health reasons—as some women have medical conditions that can make each additional day of a pregnancy life-threatening—and some states prohibit abortions beginning as early as 20 weeks into a pregnancy.

“When you’re talking about a medical issue that’s so complex, you just cannot have the state playing a heavy-handed role in this,” Galonski told Ms. “It is a gigantic abuse of power. It is not the job of the state to take away women’s agency.”

The American College of Obstetricians and Gynecologists has also recommended that abortion not be included in the list of medical procedures that could potentially be postponed.

Galonski feels medical decisions limiting access to abortion should be made by medical experts—not politicians.

“It must remain a medical decision with medical guidance from a provider,” she said. “I am not a doctor. Mr. Yost is not a doctor. We cannot pretend to practice medicine all for the sake of our own political opinions.”

While Galonski understands the importance of conserving vital medical supplies for the emergency response to the ongoing COVID-19 pandemic, she sees Yost’s original decree as an opportunistic political move to ban abortion in Ohio completely.

“Once we started to dive into his order, what we found out was that the abortion clinics were more than prepared to make available [personal protective equipment],” she said. “They were more than happy to conform with the medical guidance given—so it wasn’t necessary for Yost to come in with that heavy hand on top of all it and say, ‘You guys need to close.'”

Rep. Galonski and her colleagues in the Ohio state legislature have been working closely with abortion care providers and advocacy groups like Planned Parenthood Ohio and NARAL Pro-Choice Ohio in response to the attorney general’s order. Rep. Galonski was tapped to take the lead on the response in the state legislature—alongside co-chair Rep. Kristen Boggs and policy chair Rep. Alison Russo.

“Just because it is a pandemic doesn’t mean that you can just make wholesale sweeping decisions and take away everything that people have known under the Supreme Court,” said Galonski. “It took a bunch of people coming together to say no, and to say it in the best kind of way, and really to let people know that we’re still at work.”

“The women’s caucus is at work every day during all of this, and we’re watching,” she continued. “We’re awake … We’re at work, and the answer is no.”

Galonski asserts that Yost’s weekend declaration created more confusion at a time when there is already an overabundance of misinformation related to public health and the response to COVID-19.

Yost’s order also suggested that clinics aren’t already adhering to best practices, she said—even though there is no evidence of clinics not following the strict guidelines in place for medical practitioners and facilities. She also pushes back against the idea of abortion being deemed non-essential.

“The people who need an abortion or who are going in to speak with an abortion provider—nothing about what they’re doing is elective. To try to be reductive and to suggest that this is the same as whether or not I’m going to have a root canal tomorrow is missing the point: No matter how you come down on the issue, it should not be the state directing what women do with our bodies,” Galonski said. “We have to have our own agency.”

Texas, Louisiana and Others Attempt to Follow Ohio’s Lead

In the wake of Ohio’s move to restrict abortion access, state leaders like Gov. John Bel Edwards in Louisiana and Attorney General Ken Paxton in Texas have used the pandemic to suspend abortions outright—and Nebraska may be the next state to pass a similar decree.

And breaking these edicts comes with a steep price: In Texas, “any type of abortion that is not medically necessary to preserve the life or health of the mother” can result in penalties up to $1,000 or up to 180 days of jail time.

“Any state that decides to do this—that makes me very sad,” said Galonski. “We have this [pandemic] going on, and we need to be … trying to help people through this crisis—not creating new ones. We don’t have to be our worst selves during the middle of this tragedy; we can actually rise above all of it and focus more on what people need during the pandemic instead of creating additional burdens because you believe this is a great time to do it.”

Galonski is prepared to fight to secure abortion access in Ohio. 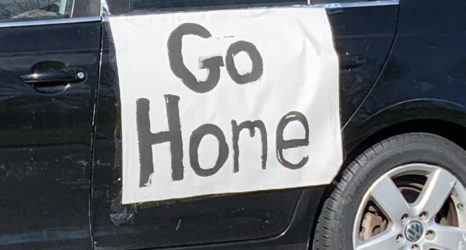 Abortion is Essential, Not Elective: How Republican Politicians are Using COVID-19 to Restrict Reproductive Health