Amid the breaking and continued news of the COVID-19 emergency, you may have missed another important healthcare story that will significantly impact the most vulnerable women in our country.

This program has provided low-income women with reproductive health care for 50 years, enabling 4 million people each year to access services like birth control, cancer screenings, and STD testing and treatment.

One thing Title X does not fund: abortion.

What is the Significance of Title X?

Where we find ourselves today requires explanation.

First, it’s important to understand the significance of Title X. Signed into law by President Nixon in 1970, this federal program grants funding to health care providers so they can serve low-income patients.

Despite the success of this program, the Trump administration drew an early target on Title X.

In 2018, the Department of Health and Human Services issued a series of new regulatory proposals that severely undermine the program and restrict providers’ ability to care for patients.

One way the administration decided to accomplish this was by removing the requirement that Title X providers offer a broad range of FDA-approved contraceptive methods—opening the door for ideologically driven organizations that oppose contraception to masquerade as trusted health care providers.

And in fact, last year a Title X grant of $1.7M was awarded to Obria Group, an organization that runs crisis pregnancy centers and is publicly opposed to birth control.

The proposed regulations also take aim at women’s health by “gagging,” or prohibiting, any provider receiving Title X funds from providing or even referring patients for abortion services—even though those services are not funded through Title X. They also require physical separation of clinics that receive Title X funds from those that provide abortion.

In response, some providers have been forced to reject Title X funding altogether rather than compromise their patient care. By the end of 2019, more than 20 percent of providers had left the network.

Low-income women and families will be most harmed by these new regulations.

Nearly 70 percent of people relying on Title X live at or below the federal poverty level, and more than half identify as a person of color.

These communities have historically been disadvantaged when it comes to accessing care, and eliminating the number of trusted reproductive health providers only exacerbates this reality—especially in rural areas, where women are at greater risk of losing their sole provider.

As with many of President Trump’s proposals, lawsuits ensued.

Arguments centered around the harm these changes will inflict on low-income people already struggling to access care, and the strain it creates on states and grantees that will have to reject funding in order to offer comprehensive medical information to patients.

California Women’s Law Center (CWLC) authored an amicus brief in State of California vs. Azar, which focused specifically on the harm these rules will cause women in rural communities.

At first, district courts blocked the regulations by issuing preliminary injunctions. Courts in California, Maryland, Oregon and Washington all halted the rules from going into effect, allowing providers to continue operating as usual.

However, the federal administration appealed the injunctions and a three-judge panel from the Ninth Circuit Court of Appeals agreed to stay them—meaning the dangerous proposed rules effectively went into place.

But it didn’t end there. Plaintiffs in California, Oregon and Washington appealed the Ninth Circuit three-judge panel’s ruling, requesting an en banc—or full court—panel to reconsider their decision. And, in September 2019, the case was heard by the entire bench.

On February 24, the full Ninth Circuit issued its final decision. The Court ruled on the merits of the case, rather than just the procedural portions of the stay.

In a small victory, they temporarily halted the requirement that Title X providers be physically separated from facilities that provide abortion; but it was an otherwise deeply disappointing decision, because the Court lifted the injunctions to allow most of the new Title X rules to take effect permanently.

These rule changes will have devastating consequences for low-income women and their families.

And it’s another recent example of political ideology undermining our health care.

In a split decision, the judges voted along party lines. All judges in favor of lifting the injunction were appointed by Republican presidents, while all dissenting judges were nominated by Democrats. The two deciding votes were cast by Trump appointees.

From the beginning, President Trump has made clear his intention of stacking the benches with anti-abortion judges. To date, he has effectively accomplished this goal, with the appointment of ten judges to the Ninth Circuit alone.

In addition, there are legal challenges on abortion laws bubbling up around the country—a shift in court composition which should be worrisome for women everywhere.

What’s next for Title X?

A District Court of Maryland has upheld the injunction in that state, but elsewhere in the nation the rules will stand, at least for now. Legal advocates will seek potential avenues to continue this fight, and courtroom battles will wage on.

But in the meantime, poor women and their families will bear a tremendous burden. 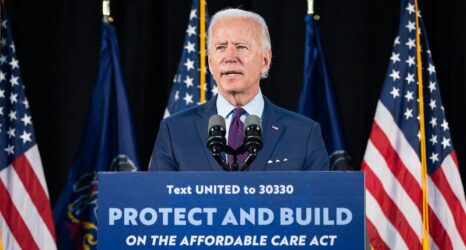 What Women Can Expect from a Biden Presidency: On Health Care

Q&A: Author Sheba Karim on India, #MeToo and “The Marvelous Mirza Girls”
Rest in Power: Arlene Pieper, Marathon Trailblazer
‘I’ve Had One Too’ Author Anna Wood Demystifies Abortion: “It Can Be Both the Right Decision and an Emotional Decision”