"Resist Everything Except Temptation": Anarchism in Art - Ms. Magazine
Skip to content

What can be gained from reading art for its politics? We stand now in a political moment in the U.S. as in other parts of the world, where fascism is rising along with political attempts to frame certain people as “other” and therefore worthy of mistreatment, disdain and death.

Simultaneously, history and intellectuality are being derided as defective somehow—even in an era when we have more information about history, writing and art at our fingertips via the internet, along with all manner of nonsense produced there as well.

This precarious political moment makes art all the more important. Much can be gained from cultural shifts—changing hearts and minds, even when political access is diminishing for some (via voter suppression, most immediately, in the United States). Few would question the important cultural shifts emboldened by the work of writers like Toni Morrison, James Baldwin, Margaret Atwood and Oscar Wilde.

The latter is the topic of Kristian Williams’s new book, “Resist Everything Except Temptation.” He offers deep scholarship on the anarchist philosophies of Oscar Wilde while also delivering a pleasurable read.

The title derives, of course, from the witticisms and strong writing for which Wilde was known. He was equally known for his selfishness, excess, incarceration, exile, and yes, homosexuality. (A term, Williams does well to point out, that he would not have used in the 1800s.)

Wilde did not often proclaim himself an anarchist—which might make the focus of this book odd, were it not for how the trope of anarchism places Williams’s scholarship in the context of social change in the late 1800s. He cleverly puts Wilde in dialogue with the practical ideas of self-proclaimed anarchists such as Kropotkin and Goldman.

This book is also timely, as anarchists and anti-fascists are being targeted as terrorists by President Donald Trump, who shows no understanding of what anarchists might profess. (“Might” being the operative word, for such a diverse group of people.)

As a person who creates art for the express purpose of positive cultural change, I believe “Resist Everything but Temptation” offers a way of framing creative work that can lead us to its more conscious political use and allow us to enjoy and explore it more deeply.

“By putting the politics first, it is possible to find a kind of unifying outline for Wilde’s thoughts as a whole. His politics connect to his aestheticism, to his sexuality and nationality, to his humor and irony and to his deeply tragic view of life. Wilde’s political commitments were subtly but centrally present in even his purely aesthetic works; and conversely, his aesthetics, his critical perspective, and even his keen wit and sense of irony had their role in shaping his politics.”

He was clearly interested in a depth of individual freedom—and not just for men—that I believe should interest us today.

Though Wilde is often depicted in contemporary times as a gay dandy, interested mainly in beauty and selfishness, there is scant evidence that he carries the pursuit as far as contemporary upper-class white gay men often do, into the realm of apolitical living and even misogyny.  One might err historically to call Wilde a feminist in the same way that homosexual is a misnomer. “Still, the overall direction of his thought—and, as importantly, his desires—was toward an ideal of freedom, toward a humane society, and in sympathy with those who fight to free themselves from oppression.”

In his actual dealings with women, Wilde promoted expression in an unusual way for the time period. For two years (1887-9) Wilde edited the publication Women’s World.

“Before he took charge, the Lady’s World was a failing fashion and gossip magazine. Changing the name and recruiting an impressive collection of contributors, Wilde set out to make it ‘the recognized organ for the expression of women’s opinions on all subjects of literature, art and modern life’ and to ‘deal not merely with what women wear, but with what they think, and what they feel.’ …Contributors included feminists, suffragists, and trade unionists, the anti-racist and anti-imperialist agitator Olive Schreiner, and the anarchist poet Louise S. Bevington.”

Similarly, in his own marriage, while he could not liberate his wife from the effects of his behavior and its persecution, this did not mean he lacked love for his family. Evidence suggests that he participated and cared for his wife and children: “He was eager that his wife Constance have and pursue her own ideas, her own interests, her own projects and commitments.”

Indeed, she was often more politically active than he, advocating for women’s suffrage, non-oppressive fashion standards for women and home rule in Ireland. “Perhaps most notably, Constance believed that marriage should exist as a contract of limited duration, renewable if desired.”

As Wilde argued in “The Soul of Man under Socialism,” “With the abolition of private property, marriage in its present form must disappear.” He was concerned for the individuality of all whom it constrained.

Analysis of Wilde’s writings form the bulk of Williams’ book and it’s a pleasure touring back through his canon with anarchism and liberation as the frame. In so many ways, his plays in particular helped audiences to consider the conventions of gendered interactions and capitalist notions of conformity. There is much to inspire our current work in this regard—and to prompt us to remember that not all positive social change happens in the realm of law and politics. Much of it comes from art and creativity.

As Williams reminds us, “Where Nietzsche’s strategy was a frontal attack, Wilde’s was one of infiltration and subversion. By provoking but not antagonizing, he disarmed the audience with his wit and made them complicit with their laughter.” 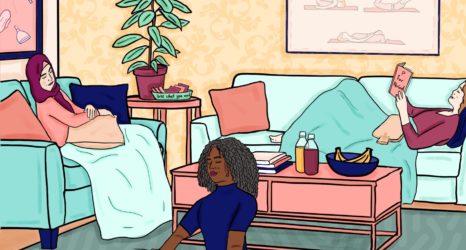 ‘Period Futures’ Sparks Curiosity and Conversation Around Future of Periods

We Heart: ArtActivistBarbie Taking on Patriarchy in the Art World