And they allow schools to resolve cases involving students through mediation rather than investigation—which was prohibited by the Obama administration, since mediation assumes a level playing field which does not exist between a survivor and perpetrator.

The new rules also allow schools to require survivors to prove their allegations by “clear and convincing evidence,” a higher standard than the usual “preponderance of the evidence” standard used in most other disciplinary matters on campus. And they exempt most online sexual harassment as well as sexual misconduct that takes place outside of the United States (e.g. study abroad programs) or that did not occur within a university program or activity (e.g. off-campus housing), even if it impacts the survivor’s education.

Most school officials were opposed to these changes—and rightly so. They remove major categories of misconduct from schools’ jurisdictions. And they introduce complicated legal questions and procedures that will require the officials involved—who are usually university administrators and regular faculty members—to have significant legal training.

“Even well-meaning and diligent university faculty and staff members cannot serve as competent hearing officers under the revised regulations, at least not without robust training that campus officials will have trouble providing,” says Professor Ben Trachtenberg from University of Missouri School of Law.

If schools follow the new rules, survivors no doubt will be reluctant to report sexual harassment and assault.

While some schools are accepting the rules and adopting restrictive policies, others are finding creative ways to get around the rules by designing policies that will minimize these harmful effects.

We examined a few of these new policies—here’s what we found.

Stanford has issued a draft policy that adopts an extremely narrow definition of sexual harassment and assault (some say narrower than the Trump administration regulations) and employs strict standards for adjudication, including live hearings and cross examination of the parties. The proposal uses the “preponderance of the evidence” standard (more likely than not) rather than the higher “clear and convincing evidence” standard, allowed by the new regulations.

According to the proposal, hearings are overseen by a “neutral” hearing officer, unaffiliated with Stanford, who is experienced and trained in adjudicating matters of civil rights, sexual harassment and/or sexual violence, such as a retired judge. For students, Stanford will provide up to two hours of consultation with an attorney from the hearing panel.

Stanford promises in the future to adopt policies that extend beyond the new federal regulations.

“Stanford is committed to ensuring an appropriate response to all allegations of sexual harassment and assault that occur within a Stanford program or activity, including acts that do not fall within Title IX’s scope,” said Lauren Schoenthaler, senior associate vice provost for institutional equity and access.

Princeton is attempting to get around the guidelines by developing two policies—a Title IX policy and a University Sexual Misconduct policy.

The Title IX policy will addresses cases that fall under the narrowed definition and application of Title IX, whereas all other types of behavior will fall under the University Sexual Misconduct policy, including conduct associated with University-sponsored activities outside of the U.S.; conduct involving the use of University computing, network resources, and email accounts; and sexual misconduct that occurs within eating clubs or elsewhere in the local vicinity. According to the university, “Conduct that violated [u]niversity policy last year will continue to violate [u]niversity policy this year but … may be adjudicated under two different grievance procedures.”

Princeton also now offers students the option of a “voluntary, remedies-based” process tantamount to mediation of sexual harassment and assault cases, an approach prohibited by the Obama rules.

The university will also provide students, staff and faculty with “predetermined financial resources to assist students, faculty and staff to engage with attorneys to serve as their advisers.”

University of Michigan: Two Types of Misconduct, One Set of Procedures

In addition to private schools like Stanford and Princeton, public universities like UT Austin and University of Michigan are also issuing guidelines in response to the new rules.

The University of Michigan has adopted a policy with two types of prohibited misconduct:

“Title IX misconduct,” conforms to the narrow definition set forth by the Trump rules.

“Sexual and gender-based misconduct” is broader, and includes unwelcome sexual conduct that wouldn’t otherwise qualify. It also covers conduct that the new rules would exclude because it did not occur in “a university program or activity” or “against a person in the United States.”

The University of Michigan’s new procedure allows it to address both types of conduct. But for cases that don’t meet the new requirements, the university will still use the same restrictive procedures—including live hearings with cross-examination of parties—that it must now use for its Title IX cases.

No matter which type of misconduct is alleged, the university will use the lower preponderance of the evidence standard when determining whether the accused should be held responsible.

Michigan is careful not to describe the process as a mediation—instead, it says the adaptable resolution procedures take the form of a “facilitated interaction,” either direct or through intermediaries, “with the goal of creating a plan or agreement to repair the harm (to the extent possible).”

Advocates are still fighting in court to stop the Trump administration regulations.

A recent study of college-aged people between 18 and 24 showed that women were more likely than men to report both sexual harassment (37 percent, versus 22 percent) and sexual assault (36 percent, compared to 16 percent) during early adulthood.

In other words, tolerating sexual harassment is opening the door to sexual assault.

This study makes it clear why it’s so important to have strong policies to address a wide range of sexually harassing behavior—a point not missed by at least some colleges. Hopefully others will follow their lead.

Carrie N. Baker, J.D., Ph.D., is the Sylvia Dlugasch Bauman Chair of American Studies and a professor in the Program for the Study of Women and Gender at Smith College. She is a contributing editor at Ms. magazine. You can contact Dr. Baker at cbaker@msmagazine.com or follow her on Twitter @CarrieNBaker.
Rigel C. Oliveri is the Isabelle Wade and John C. Lyda Professor of Law at the University of Missouri. She is a nationally recognized expert on fair housing law and sexual harassment. Her published work has appeared in a number of prestigious journals and been cited by courts. She is the co-author of a forthcoming book: "Sexual Harassment Law: Cases, History and Practice."

Women Carry Two-Thirds of Student Loan Debt. How Does the Pay Gap, Plus This Debt, Affect Women Workers? 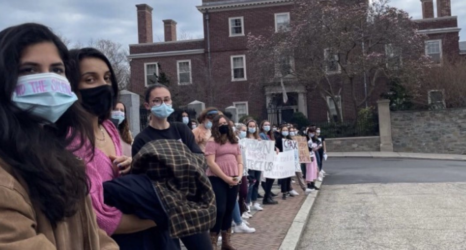 Student Activists Are Breaking the Silence on Period Poverty
Boston Will Soon Have a Woman Mayor; How Can the U.S. Get More Women Judges?: Weekend Reading on Women’s Representation
The Taliban Further Tightens Its Grip on Afghan Women and Girls: “These Young Women Have Fought for Themselves”