This article is the final installment of a series based on a feature piece in the Winter 2021 issue of Ms., “A New Era for Women.” The series breaks down President Joe Biden and Vice President Kamala Harris’s promise to “build back better” on women’s rights related to health care, economic security and physical safety. Get caught up here. And become a member today to read the entire issue—through our app and in print.

When it comes to rebuilding the badly broken U.S. education system and preventing violence against women and girls, President Joe Biden and Vice President Kamala Harris have their work cut out for them.

Additionally, during the Trump presidency, the Violence Against Women Act (VAWA) expired for the first time since 1994.

Women outside the U.S. also suffered greatly under Trump. His administration’s immigration policies blocked many women fleeing gendered violence in their home countries from seeking refuge in the U.S. Trump even opposed a U.N. Security Council resolution to end rape as a weapon of war until the council deleted any mention of sexual and reproductive health and weakened references to the International Criminal Court, making it harder for women and girls to seek justice.

The Biden-Harris administration has already established its ambitious agenda for advancing women’s rights in areas such as health care, reproductive rights, economic security, family life, education and gender-based violence. With this plan in mind, Ms. spoke to leading policymakers, advocates and activists to learn what women can expect—and hope for—in 2021 and beyond.

The president of the American Federation of Teachers, Randi Weingarten, said the current administration will take a polar-opposite approach to the Trump administration’s chaos, cruelty and disfunction.

“We have to broaden opportunity, keep on growing the economy, but then also make sure it’s a whole lot fairer than it is right now,” Weingarten told Ms. “The union movement and public education are two of the key vehicles to do those things. Under Joe Biden’s leadership, we could have a renaissance in public education and a resurgence of union organizing that will create shared prosperity in America that hugely helps deal with the polarization, the division, the racism and the inequality that Trump has so diabolically and effectively stoked. Biden has to show people that government can work for them.”

Biden and Harris have put forward a national plan and guidance for reopening schools and have promised to ensure that teachers receive competitive wages and benefits. They pledged to expand support for public education, providing two years of tuition-free community college or other high-quality training; and for families with incomes below $125,000, public colleges and universities will also be tuition-free.

Just this week, key members of the Biden administration—namely, the president, vice president and Dr. Anthony Fauci—have called for teachers to be prioritized in the vaccine distribution process, but have hesitated to call it a requirement for opening schools. These comments come on the heels of a recent CDC guidance encouraging schools not to wait for staff to be vaccinated to bring back students full-time but to implement new mitigation strategies—starting with assessing the level of community transmission, then ramping up to regular testing, universal and correct use of masks, physical distancing and more. The CDC guidance also encourages providing vaccination for teachers and staff as soon as supply allows.

Biden and Harris also want to reduce existing student debt—two-thirds of which is held by women—by forgiving all undergraduate tuition-related federal student debt from two- and four-year public colleges and universities for debtholders earning up to $125,000 per year.

Reversing the damage of the Trump administration’s war on women is a key part of the Biden-Harris platform for women’s rights. In fact, one of the top priorities for the first 100 days is to finally reauthorize the Violence Against Women Act (VAWA). This legislation is “critically important to assure funding for programs, education and crisis intervention,” Latifa Lyles, vice president of advocacy and survivor initiatives at TIME’S UP, told Ms.

The VAWA reauthorization would also expand survivors’ access to housing assistance, provide them with cash aid, guarantee paid leave from employment to deal with the harms of gender-based violence and authorize unemployment compensation if needed.

Senate Republicans blocked VAWA’s passage because it would bar more abusers from buying guns. Right now, “there are lots of loopholes and there’s one in particular that relates to domestic abusers,” Lyles said. “If [the abuser] is not living with the victim, the restriction on access to guns and firearms does not apply, which of course leaves out a lot of protections for a lot of people.”

More than half of all Indigenous women are subject to sexual violence in their lifetime and, for them, murder is the third-leading cause of death.

Another important issue is violence against young women. Trump “rolled back great strides that were made in the Obama administration that addressed campus sexual assault and violence. … Trump opened up loopholes for students accused of sexual misconduct and actually narrowed the definition of sexual harassment,” Lyles said.

Biden and Harris vowed they will restore the Obama administration’s Title IX guidelines and increase fines imposed on colleges for failing to report incidents of violence on campus.

For women fleeing violence in other countries, Biden and Harris will repeal Trump’s anti-immigrant orders, including the cruel policy of separating parents from children, and will reinstate explicit asylum protections for domestic violence and sexual violence survivors whose home governments cannot or will not protect them. They say they will increase the number of visas for domestic violence survivors, end processing delays and ensure applicants are not detained or deported while their cases are in process.

On Feb. 4, Biden took the first step toward rebuilding the broken U.S Refugee Admissions Program (USRAP) by issuing an executive order that provides a blueprint for rebuilding the badly damaged asylum program.

A New Era for Women: Biden’s Plan to Invest in Workers and Families 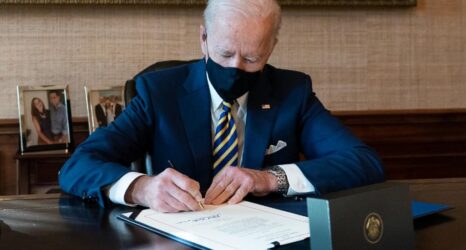 A New Era for Women: The Biden Administration’s Vision on Health Care and Reproductive Rights