"It Wouldn't Be Good for the Institution": on Meghan Markle, Depression and Who We Believe - Ms. Magazine
Skip to content

When broadcasters voice disbelief over Meghan Markle’s claims of mental illness, non-famous people with mental illness are receiving a clear message: We don’t believe you.

Like seemingly 90 percent of my Twitter timeline, I was glued to my laptop Sunday night to watch Oprah’s interview on CBS with Prince Harry and Meghan Markle. While there were all sorts of “bombshells,” the part that took my breath away was when Markle said that there was a time when she was pregnant with her son Archie that she “didn’t want to be alive anymore.”

My heart broke for her. I wept for her. For how alone she must have felt and for all the times she asked for help and didn’t get it. But I also cried for myself. For the times that I convinced myself that it wasn’t so bad, for the times I tried to power through, and for the times I told people that I was in trouble and they didn’t (or couldn’t) believe things were that bad.

Like Markle, I have experienced extreme depression that frightened me at times. When she said, “This isn’t me,” I felt that in my soul. She, like many of us, could recognize just how far she’d drifted from herself in the throes of that depression.

Of course, shortly after the interview, the disappointingly predictable happened. People—including tabloid bully Piers Morgan—claimed she was faking her mental illness, that she was making things up, and, perhaps most insulting, that she was doing this for attention.

To briefly clarify a common misunderstanding, I want to say that mental illness can have absolutely nothing to do with how perfect your life appears on the outside. There were dark moments when Markle and Harry would appear smiling together in public. There were moments when people would tell me that I looked completely blissful, when it felt like I was dying on the inside.

Depression is a liar: It can tell us that the world is better off without us, and that there is no hope. While on the outside, we can appear to have it all.

This makes disclosing mental illness tricky—and risky. And the idea that we would disclose mental illness for attention is fairly absurd. The attention we receive for such a disclosure is often not just negative, but can prove a threat to our livelihoods, reputations and families. When we do share our stories, it is so that others can understand what we’ve been through, and so that others in a similar situation might not feel quite as alone as we might have.

“We Don’t Believe You”

An increasing number of celebrities, including (ironically) members of the British royal family, have been vocal advocates for mental health support and destigmatization. Over the decade or two, there has been a cultural shift, and it is no longer the hush-hush topic it used to be. When celebrities like Demi Lovato and Chrissy Teigen are candid about their struggles, it creates the possibility for a larger cultural conversation about mental illness, stigma and what it looks like to get help.

But that doesn’t make the problem any less serious. According to the Cleveland Clinic, as many as 50 percent to 75 percent of new mothers may experience a mood shift known as the “baby blues,” and 15 percent of those women develop more serious postpartum depression. According to one study, suicide is one of the leading causes of death for postpartum women, and 5 percent of depressed mothers had thoughts of self-harm “sometimes or quite often.”

Under the stress of the COVID-19 pandemic over the last year, depression among U.S. adults has tripled. So when broadcasters voice their disbelief over Markle Markle’s claims of mental illness, there are a lot of non-famous people with mental illness who are listening and receiving a clear message: We don’t believe you.

The trouble is that while mental illness has become less stigmatized in our culture overall, when it comes to actually getting help for mental illness, many in our society still believe don’t believe women the way they should. Whether it’s sexism, a misunderstanding of mental illness, or some mix of the two, women have a credibility problem.

In the current landscape, if we can’t provide proof of our pain, our claim is seen as somehow invalid. We must be faking. It’s obviously just a new flavor of misogyny (not unlike the days when women were over-diagnosed with mental illness for, say, having PMS or an opinion).

If people do believe us, it’s often downplayed. When we tell people about our experience of depression or anxiety, it is generally perceived as being “not that bad.”

In my case, people would tell me, “It’s just a touch of postpartum depression”—even though I’ve had a clinical depression diagnosis since middle school. “All new moms feel like that. Parenting is really hard!” they would tell me.

Except, when I would tell other new moms how I really felt, it would frighten them. They would get very quiet. We’re supposed to be honest, they seemed to say, but not like that. The message was clear: This was not how good moms felt.

I was told, in some cases, that I shouldn’t be honest about my mental health because it could risk my baby being taken away from me.  It felt like I had a choice: I was either unfit or a liar.

“It Wouldn’t Be Good for the Institution”: Women’s Mental Health as a Burden

In the interview, Markle goes on to say that she asked multiple people for help, including to go to a hospital, and was denied because “it wouldn’t be good for the institution.” The idea that women with mental illness are a burden is a prevalent one. Yet, if we don’t speak up, we’re blamed for that, too. “If only she’d said something,” they would cry.

In the depths of my depression, I felt like a ghost. I went through the motions, but I felt invisible—as though everyone was looking right through me. I’d had thoughts of not wanting to go on living also. Things would have been easier and simpler without me around, I’d thought. It took ferocious strength to recognize these thoughts as being not-me.

Ultimately, I knew in my heart  that I couldn’t be a mother at all unless I dealt with the issue of my depression head-on. I started therapy. I started doing the things that used to bring me joy, even if I had to force myself. I advocated for myself. I fought for my life.

Eventually, I worked up the nerve to talk to my general practitioner, who prescribed Zoloft. When I left her office, I cried in my car in the parking lot. I was completely relieved that someone had believed me and then actually done something to help me. Before my prescription was even filled, I felt, for the first time in months, something akin to joy. Elation, even.

The power of being seen, heard and believed is that we are able to remember our own humanity and worth. We still have a long way to go when it comes to destigmatizing mental illness.

As usual, the work begins with believing women—believing their stories and that they are worthy, even in their imperfection—and then giving them the help they are asking for.

Christy Tending is an activist, educator, writer and mother. She teaches online courses about sustainable self-care to students all over the world and lives in Oakland, Calif., with her family. You can learn more about her work at christytending.com or follow her on Instagram.

Megxit and The Death of Fairytale Romance 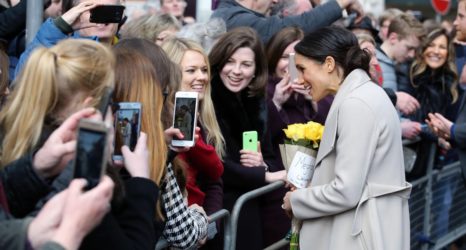