New York recently made commercial surrogacy legal, despite a history of exploitation of low-income women and women of color.

This article was originally published on PassBlue. It is reposted here with permission.

In the middle of the night on April 2, 2020, buried in a 400-page state budget, a provision to make commercial surrogacy legal in New York was adopted despite a campaign against the move by leading advocates of women’s reproductive health and rights.

The law took effect on Feb. 15, and surrogate pregnancies became a recognized business in the state. Pleas to Gov. Andrew Cuomo from leaders of numerous organizations asking him to withdraw the legislation had gone unanswered. Then COVID-19 disrupted plans to take the opposition campaign to Albany, the capital. The new law has been enacted as most nations around the world have made the practice of commercial surrogacy illegal. Most American states and neighboring Canada also prohibit it.

Taina Bien-Aimé, the executive director of the Coalition Against Trafficking in Women, an international nongovernment organization based in New York City, has been a major opponent of the new law from the time it first reached the state legislature in 2019.

“The law was passed in 2020 under the cloak of darkness at the height of COVID-19 infections and deaths in New York without a democratic process, including legislative hearings or public education,” she wrote in a statement to PassBlue. “The campaign leading to its controversial passage was buoyed by misinformation, disinformation and total disregard of women’s rights to health and equality.”

Bien-Aimé challenges, for example, the claim that New York was one of the last states to legalize fully the business of commercial surrogacy, when it is only the 10th state, plus the District of Columbia, to do so.

“As with all organized exploitation of women for profit, this is also a follow-the-money game,” she said. “We must examine the incentive of a multibillion-dollar reproductive technology industry pushing the state to abdicate its responsibilities to protect the health and rights of the most socio-economically vulnerable mothers.” (Note: This article is focused on the controversial issues only surrounding commercial surrogacy as a business.)

Globally, commercial surrogacy is an enormously lucrative trade, and growing quickly. Global Market Insights, an international market research and consulting company based in Delaware, tracks trends in the world economy. In December 2020, the company projected that by 2025 the growth of what it calls the “surrogacy market,” will reach a record revenue level of $27.5 billion, due to “an increasing number of infertility cases across the world along with growing demand for assisted reproductive technologies.”

Surrogate pregnancies—when one or more fertilized eggs (ova) taken from a woman are transplanted in the body of another—are not uncommon in many countries. They generally fall into two categories:

Private agreements known as “altruistic” surrogacies are performed by mutual consent to assist an infertile woman conceive a child. These are mostly, but not always, legal and may not involve significant payments beyond covering costs, though restrictions may apply.

In the second category, a process known as gestational surrogacy, the child is not biologically related to the surrogate mother. Instead, the embryo is created by in vitro fertilization (IVF), using the eggs and sperm of the intended parents or donors and is then transferred to the surrogate.

In the commercial surrogacy business, egg donors—who may be paid upward of $30,000—are usually strangers selected for any number of apparent attributes. They and women who become surrogate mothers often need money to pay off debts or help their families through tough financial times. The COVID-19 pandemic has been one such catalyst.

The service of a specialist doctor who carries out a surrogacy procedure can demand a high fee, often averaging around $100,000 or more. Websites have multiplied recently, connecting women to surrogacy services through social media.

Minority women are often attracted to the chance to earn money but suffer when things go wrong physically, economically or legally, Bien-Aimé said in a video that her Coalition aired on Feb. 25, 10 days after the New York State law took effect.

For women, and men, with higher incomes, the reasons for choosing surrogacy differ. LGBTQ couples have benefited from surrogacy, and, in a relatively new phenomenon, career women, many in their 30s or 40s, who have deferred having children, are taking advantage of surrogacy services.

The United States is by far the leading provider of surrogacy services, experts report, because it is considered safe and offers legal protections when disputes arise over parentage, after a child is born. It is also one of the relatively few countries in the world where commercial surrogacy is legal in some places.

Many women come to the U.S. from East and Southeast Asia—including China—where commercial surrogacy is illegal, to arrange and contract for a surrogate birth through a third party. Such a commercial agreement is also illegal in most of Western Europe and numerous countries in Latin America and the Caribbean region, where laws are evolving.

India has always been a leading nation numerically for commercial surrogacy. However, in recent years it has been trying to move away from the business—and the image it created of surrogacy “camps” full of Indian women bearing children, often for foreigners who pay less than half the cost of procedures in the U.S. New laws have been passed in India, but they can be difficult to enforce, and a debate goes on about who can legally qualify to use the service.

While surrogate mothers may face unanticipated medical problems, or the traumatic issue of parting with a child they may ultimately feel belongs to them, the issue of harm to commercially hired egg donors often gets less attention.

Kylee Kwiatkowski, whose story is revealed in disturbing detail in Bien-Aimé’s video, was a 23-year-old recent college graduate in Florida overwhelmed by student loan repayments and other debts. She decided that becoming an egg donor could help her earn the money she needed to deal with her mounting financial bills.

As she tells her story, she found a surrogacy service on Craigslist that she thought she could trust and applied as an egg donor. She was soon contacted by the surrogacy service provider, based in Toronto, who accepted her as a client after a screening. She was told, however, that because commercial surrogacy was illegal in Canada, she would have to do all the medical prep at home in the U.S., basically unsupervised.

She traveled to Toronto to undergo the removal of eggs on behalf of a Canadian couple, or so she was told. Almost immediately, her story became a painful nightmare. She had been heavily sedated, she said, but was hustled off on a flight back to Florida after the procedure. She became sick in waves of nausea and vomiting that continued through the trip and after arriving in Florida.

“By the time my boyfriend met me at the airport, he found me lying down on the carpet in the luggage hall, as I was too tired and sick to stand,” she wrote on the website Legalize Surrogacy: Why Not.

The next day she had a stroke. She wrote that she was pulled back from the brink of death twice by emergency physicians at a local hospital who found that her ovaries had been pumped up almost to the size of grapefruits by hormonal stimulants to produce far more eggs than she had been told would be extracted. Her abdomen was grossly swollen with fluid.

She later won compensation but says she cannot provide details because of a nondisclosure agreement. In a message to PassBlue in early March 2021, she updated her recent history in a memo.

“It has now been 10 years since my egg donation procedure and resulting severe health complications. I still have daily residual effects including nerve damage to the entire right side of my body along with some short-term memory and other cognitive challenges.

“One full year after the procedure and my hospital stay, my doctors had finally given me a full medical release with the understanding that this would be what the rest of my life would look like.

“Five years ago, I got married and my husband and I knew that we wanted to start trying to have children right away [but] with the egg donation history, we also knew that there could be some challenges and sought out help immediately,” she added. “We are now five years into our fertility journey and have not been successful.

“We have worked with multiple fertility specialists, holistic practitioners, acupuncturists and nutritionists just to name a few,” she wrote. “All have helped shed light on the unique issues my body is, still to this day, dealing with. The common thread always leads back to the severe influx of hormones and trauma that was introduced to my body 10 years ago.”

Barbara Crossette is the senior consulting editor and writer for PassBlue and the United Nations correspondent for The Nation. She is also a board member of the Carnegie Council for Ethics in International Affairs and a member of the Council on Foreign Relations. She is a contribtor to the Oxford Handbook on the United Nations. Previously, Crossette was the UN bureau chief for The New York Times from 1994 to 2001 and before that its chief correspondent in Southeast Asia and South Asia. She is the author of "So Close to Heaven: The Vanishing Buddhist Kingdoms of the Himalayas," "The Great Hill Stations of Asia" and a Foreign Policy Association study, "India Changes Course," in the Foreign Policy Association's "Great Decisions 2015." Crossette won the George Polk award for her coverage in India of the assassination of Rajiv Gandhi in 1991 and the 2010 Shorenstein Prize for her writing on Asia. 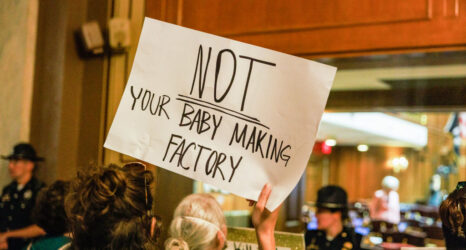 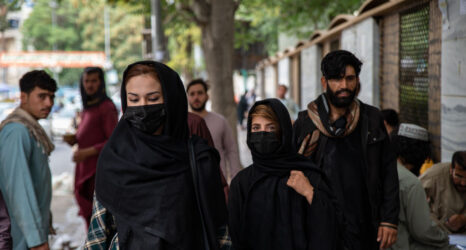 Year in Review: The Taliban in Power

A Year After the Decriminalization of Abortion in Mexico: What Latin America Can Teach the Rest of the World
War on Women Report: The Post-Roe Nightmare; Lindsey Graham’s 15-Week Abortion Ban; Matt Gaetz Can Continue to Abuse Young Girls
Hillary Clinton on Iran, Abortion and the 2022 Midterms