"Her Flag" Celebrates the 100th Anniversary of the 19th Amendment - Ms. Magazine
Skip to content

19th Amendment to the U.S. Constitution

As part of the celebration of the 100th anniversary of the passage of the 19th Amendment, the National Museum of Women in the Arts is partnering with Her Flag to display a new banner on its New York Avenue façade.

Created by visual artist Marilyn Artus, the work is, like the suffrage movement and the passage of the amendment, the work of many women over time.

Describing herself as “a female equality activist, fiber artist and a suffrage era nerd,” Artus’s work is a comment on women’s roles in the development of the United States. Artus has long been using the American flag as a vehicle for feminist exploration, as she cut and sewed back together pieces of American history.

From the passage of the 19th Amendment by Congress in June 1919, it would be another 15 months before—by one vote—Tennessee became the 36th state to ratify the amendment, thereby ensuring its adoption on August 26, 1920, as part of the Constitution of the United States.

For the creation of Her Flag, Artus planned to travel to all 36 states that voted to ratify, in order of ratification, over a time span of 14 months to work with the state artists creating a stripe for Her Flag and sewing it onto the 18- by 26-foot flag.

“I got to 28 of the 36 states before I had to start sewing the stripes virtually on the originally scheduled dates I had planned from home. I logged over 22,000 miles in my car and numerous miles to the couple of states I flew to during the winter months. (I was not about to drive into rural North Dakota in January!)”

The project involved a network of curators, art coaches, artists and other creatives who spread the word. A committee reviewed over 340 applicants to pick the finalists. There are graphic designers, book illustrators, painters, fiber artists, photographers, mixed media artists and others that make up the 36 collaborators from across the country. Artus points out that while there is some repeated women’s suffrage imagery, there are diverse art styles so each stripe looks unique. While most artists focused on women activists within their state’s histories, they were asked to keep their artwork celebratory and consider history both local and national. The project features women from the suffrage and civil rights movements as well as contemporary women and girls involved in today’s social justice activism.

A few of the artists employed their usual art-making methods—such as Lisa Jean Allswede, a fiber-mixed media who represented Nevada. She painted on watercolor paper then machine and hand sewed details to her stripe and had the finished work photographed. From digital files, Artus had all 36 stripes printed on outdoor UV-grade commercial banner fabric. Most noted is Nashville-based artist Higgins Bond whose pencil drawings honor Ida B. Wells, Mary Church Terrell, Rosa Parks, Ella Baker and Fannie Lou Hamer.

Her Flag reveals many pages left out of the history books. While some women became world-famous and are revered today, many were only known in their place and time. Representing different races and creeds, they are united in their dedication to suffrage and civil rights movements.

While the 19th Amendment states that no one be denied the vote based on sex, the right to vote to all women would not be afforded to Native American, Asian American, Latinx and African American women until much later. Displaying Her Flag in Washington D.C. is particularly significant, as D.C. residents do not yet have full representation.

In one of its final exhibits before closing for a two-year renovation, The NMWA will unfold Her Flag from June 9 through July 12, 2021. A virtual panel discussion will take place June 16 at 1:30 pm EST with Marilyn Artus, Higgins Bond, fellow featured artist Nicole LaRue and Stasha Rhodes, campaign director of 51 for 51 in conversation with NMWA Associate Curator Ginny Treanor. They will discuss the centenary of the 19th Amendment, the making of Her Flag and the continuing struggle for universal access to the ballot box. 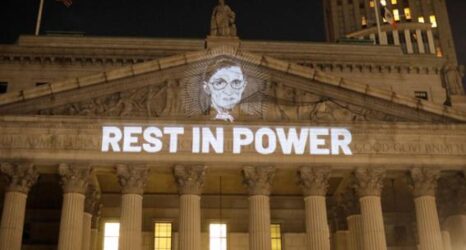 Abortion Bans, Feminism and Sexism Fuel Sally Edelstein’s Art: “Whatever We’re Exposed to Has An Impact On Us”