Over the centuries, for political and nation-building reasons, people fashioned Malintzin into a diabolical schemer on par with Eve. Give a woman power and this is what happens.

Though much has already been written to acknowledge the recent 500-year anniversary of the cataclysmic clash between the Mexica (known as “Aztecs”) and the Spaniards, prompting the fall of that wonder of a city that was Tenochtitlan, a singular story of the life of one woman who survived that conflict, was kidnapped and enslaved years before it took place, is still misunderstood.

In 1519, two years before the island city of Tenochtitlan (today’s Mexico City) fell to the invaders from Spain, there was a battle between the army of Hernando Cortés and the Mayas at Potonchan. As victors, the Spaniards were awarded war prizes that included 20 Indigenous women, a common practice.

As Cortés journeyed to see Moctezuma, dragging these women with him, traveling from the coastal lands and through jungles, across mountains and volcanoes to the interior valley, many of the Tlaxcalan, Totonac and Mexica chieftains he encountered would award him more women.

During Hispanic Heritage Month, let us not forget the women—thousands of silent witnesses to war and the destruction and trauma left in its wake.

Within the original group of 20 women awarded to Cortés, one woman about 18 years of age, was not silent. Thrust into serving as Cortés’s and Moctezuma’s interpreter, she has been called Malinalli, Malintzin, La Malinche, Malinalxochitl and Marina. Historians dispute her name, her birthplace (possibly a village in the Isthmus of Tehuantepec), the year of her birth and of her death.

The few events not shrouded in mystery include the year she was handed off to Cortés, 1519, or on the Mexica calendar, the year One Reed in the age of the Fifth Sun—which we are still in now.

She was an eyewitness to the conquest and for most of my life I have been obsessed with her story.

I grew up speaking English and listening in Spanish. Learning a language and absorbing its many meanings, I discovered, transcends the spoken word. At least that’s what I like to tell myself, for I am not 100 percent fluent, speaking Spanish with a mix of hesitancy spiced with brio.

I first encountered Malintzin many years ago in the pages of The True History of the Conquest of New Spain, by Bernal Díaz del Castillo, a soldier in Cortés’s army. Books were my best friends as a teen and I was happiest devouring something historical.

Malintzin’s ability to speak and understand Nahuatl, Maya and Spanish was inspirational as I saw her as a commanding, respected, confident woman bridging worlds. Her voice rose above men’s words.

I can still envision her in the middle of negotiations and battles, death breathing down her neck, trying to survive cultures colliding and the world breaking into something that no one ever prepared her, or anyone else, for in Mexico.

I can still envision her in the middle of negotiations and battles, death breathing down her neck, trying to survive cultures colliding and the world breaking into something that no one ever prepared her, or anyone else, for in Mexico.

I believed there was something heroic to all of that. I still do.

At some point in my young adulthood, I learned that just uttering “Malinche” was as bad as saying a swear word. And that to call someone a malinchista was to denounce them as a traitor, someone who would prostitute her or himself to win favors from foreigners.

Who was she—heroine or traitor?

To try to answer that simplistic question, as a young woman I dove into research about 16th century Mexico. Even as life, school, work, family took precedence over chasing after a controversial interpreter, I could not get Malintzin out of my mind. She took root inside me and dug herself in as deeply as the image of the eagle on a prickly pear cactus with a serpent in its mouth—that symbol of Mexico, and the city Tenochtitlan.

What do you do when an image, an idea, shimmers inside you like a coronation-length mantle made up of thousands of quetzal feathers? Over the years, you live your life and ultimately endeavor to write a book, which is what I have been doing over a span of nearly 20 years.

My quest to know Malintzin has not been an easy one, for the interpreter left us no words or writings of her own. One would think that the “voice” of Cortés and Moctezuma would have left us something but that does not seem to be the case.

Eyewitness accounts of the conquest were penned by men. Cortés wrote reports from Mexico to his Emperor Charles V of Spain. He mentions Malintzin fewer than a handful of times, with casual callousness. He refers to her as his “lengua” his interpreter, tongue and says in his Fifth Letter:

“… Marina, who traveled always in my company after she had been given me as a present….”

By contrast, foot soldier Bernal Díaz calls her “a person of great importance.” He hails her as if she were a goddess. In a 16th century pictorial history of the conquest, the Lienzo de Tlaxcala, she is as finely drawn as the men—the ambassadors, warriors, priests, chieftains, Cortés and Moctezuma. Created to remind the Spanish Crown of the Tlaxcalans’ assistance during the conquest, the Lienzo illustrates their right to special status in the New World.

The original drawings were painted on a large piece of cloth and though it disappeared long ago, copies have survived. Malintzin is equal in stature to Cortés and Moctezuma, but in a few drawings she looks bigger as she stands next to, between and in front of them. Baskets piled with food, folded plain and decorated cloth sit like tribute at her feet. She is not marked or rendered in any way to suggest the Tlaxcalans thought she was evil.

Yet her birth was probably as eventful as any other child’s born during her time. They say she was a nobleman and woman’s daughter, and if so, the midwife would have welcomed her as a gift from the gods and exclaimed how it would be her lot in life to never venture far from the hearth.

According to the General History of the Things of New Spain, by Fray Bernardino de Sahagún, as the midwife cut the umbilical cord, she would have exclaimed, “Thou art to provide water, to grind maize, to drudge; thou art to sweat by the ashes, by the hearth.”

And yet this woman, fated to keep her eyes lowered to the ground and never speak in public, became one of the most controversial and reviled figures in Mexico’s history.

My research has shown me that there is no sure answer to how that happened, but a crucial one might be that it has been easy to blame her. She doesn’t own her own story, so people can see whatever they want in her. Worst of all, she committed the sin of opening her mouth to an outsider, Cortés, and the most powerful man in the land, Moctezuma, interpreting these men’s words and stories.

It has been easy to blame Malintzin. She doesn’t own her own story, so people can see whatever they want in her. An 18-year-old girl shoulders the blame and the shame.

After 500 years, the accepted story for many people is that it is her fault the Mexica were conquered, Tenochtitlan fell, and the glory of Mexico was destroyed. An 18-year-old girl shoulders the blame and the shame.

None of it matters; it’s all her fault. Over the centuries, for political and nation-building reasons, people fashioned Malintzin into a diabolical schemer on par with Eve. Give a woman power and this is what happens.

The time of the Fifth Sun, our era, is prophesied to end with an act of “movement,” though it’s not entirely clear what this means. The world has already been destroyed by jaguars, wind, fiery rain and water.

In my Mexican American heart, I want to believe that the world’s rebirth will be due to a movement of voices demanding, and winning, the battle to be heard.

Veronica Chapa is a marketing consultant and author who is working on a novel about the life of Malintzin. 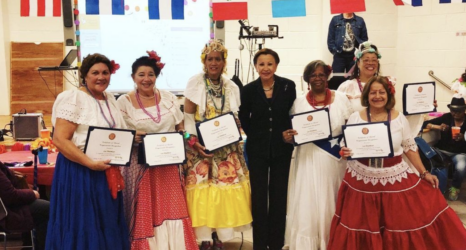 57 Cents to the Dollar: The Wage Gap for Latinas Is Hurting Our Communities

The Danger of Plea Deals in Sexual Assault Cases
The Department of Education is Failing Survivors of Campus Sexual Assault
CRT for K-12: Feminists Team Up to Create a Curriculum on Critical Race Theory for Students of All Ages