The ban is just the latest attack on trans youth in the Lone Star State.

On Monday, Texas Governor Greg Abbott signed Texas House Bill 25 into law, barring trans youth participating on sports teams from playing on the team that matches their gender. The bill is set to go into effect in January of 2022.

Opponents say the legislation addresses a nonexistent problem. “There is not one case—not one case—of a trans girl taking a competitive spot from a female student in Texas,” said state Rep. Ann Johnson (D).

With the bill’s passage, LGBTQ+ advocates in the state are increasingly worried about the safety of trans youth. Ricardo Martinez, CEO of Texas LGBTQ+ advocacy organization Equality Texas, told Ms. the bill places a target on the backs of trans youth and adults, as well as erasing intersex people.

“Despite the powerful advocacy and testimony of trans kids and adults, families and advocates, and the many emails and calls our community placed to the governor’s office to veto this harmful piece of legislation, it is now law,” said Martinez, referring to testimony provided by trans youth in front of the Texas legislature during the bill’s hearings. “We are devastated at the passage of this bill.”

Prior to its signing, the bill attracted criticism from offices as high up as the White House: Earlier this month, White House spokesperson Ike Hajinazarian called the bill “hateful,” and said President Biden believes trans youth are “some of the bravest Americans.” “These anti-transgender bills are nothing more than bullying disguised as legislation and undermine our nation’s core values,” Hajinazarian told the Dallas Morning News.

The bill is just one of hundreds introduced in state legislatures across the country this year intended to restrict the rights of trans youth—many of them pieces of copycat legislation drafted by conservative think tanks, like the Alliance Defending Freedom (Justice Amy Coney Barrett is tied to this organization). Texas is the 10th state to sign an anti-sports bill into law, following Alabama, Arkansas, Florida, Idaho, Mississippi, Montana, South Dakota, Tennessee and West Virginia.

In addition to targeting trans kids’ participation in sports, Republican-dominated legislatures have also set their sights on curtailing access to gender-affirming healthcare for trans youth. The GOP has had less success on this front, managing to pass just one so far in Arkansas, where it was blocked by a judge after a legal challenge from the American Civil Liberties Union (ACLU).

Notably, these bills are not popular across party lines: An April poll from PBS NewsHour/NPR/Marist found two-thirds of Americans—67 percent, including 66 percent of Republicans—opposed the legislation.

H.B. 25’s passage originates from the legislature’s third special legislative session of this year. Gov. Abbott began calling the special sessions earlier this year in response to Texas House Democrats breaking quorum and fleeing the state twice, which the group did in protest of GOP-spearheaded attacks on voting rights.

Texas’s legislative sessions have attracted national attention as a result—not just for their unconventionality, but for the unprecedented nature of the bills being passed. The state has come under fire in particular for the passage of S.B. 8, a six-week abortion ban that has been bouncing around in the lower courts since its enactment on September 1. The Supreme Court is set to hear two challenges to the bill on November 1.

In addition to restrictions on voting rights and abortion rights, trans rights have also been a focus of the special sessions, with GOP legislators debating multiple anti-trans sports and healthcare bills. Thus far H.B. 25 is the only anti-trans bill to pass; at least three anti-trans healthcare bills remain in committee at this time.

But being unable to sign anti trans healthcare legislation hasn’t stopped Abbott from taking aim at trans youth and their ability to access gender-affirming care. In August, in response to a request from Abbott, the Texas Department of Family and Protective Services (DFPS) commissioner released a letter determining that certain types of gender-affirming care are “child abuse” when performed on minors. (Notably, the procedures discussed are almost never performed on minors.) In his letter to the DFPS, Abbott referred to gender-affirming surgeries as “genital mutilation,” and compared them to forced sterilization.

Research has shown the opposite: Gender-affirming is life-saving. Multiple studies have shown that puberty blockers, which Republicans have sought to ban through these bills, are associated with overwhelmingly positive mental health outcomes and reduced suicide rates among trans youth.

As the Lone Star State continues to crack down on the rights of trans youth—most recently, the DFPS removed a trans suicide hotline and other affirming resources from its website for foster youth—trans youth and their families continue to advocate for their lives, while others look to flee the state.

“Trans kids and adults in Texas—and everywhere—deserve love and support, peace of mind, healthcare, happiness, to be carefree and focus on living out their greatest potential. They deserve not to be debated but affirmed, and the right to exist without their government trying to push them out of everyday life,” said Martinez. “Trans people and their futures are sacred.”

Oliver Haug is a social media editor and podcast producer with Ms. magazine. They are also a freelance journalist, focusing on LGBTQ+ issues and sexual politics. Their writing has previously appeared in Bitch Magazine, VICE, them.us, the New York Times' newsletter "The Edit," and elsewhere. You can read more of their work at oliverhaug.contently.com, and follow them on Twitter @cohaug. 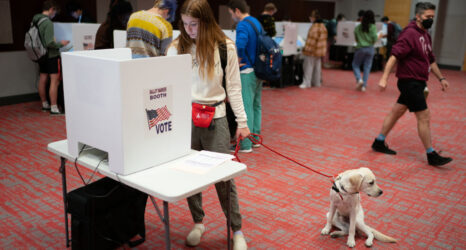