Election workers and secretaries of state who resist Trump’s election lie have faced harassment and threats—and when those individuals are women, as they often are, misogyny is often part of the backlash.

This story was originally published by The 19th.

Sexualized threats. Home break-ins. Death threats. An attempted citizen’s arrest. Being singled out by name and image by Donald Trump and his advisers. This is just a fraction of what Georgia’s election workers and their families experienced in the days and weeks after the former president made the state the focus of his “Big Lie” election conspiracy.

“There is nowhere I feel safe. Nowhere. Do you know how it feels to have the president of the United States target you?” Ruby Freeman, a poll worker in the Atlanta area, told lawmakers investigating the January 2021 insurrection in pre-recorded testimony that aired during a Tuesday hearing.

The Select Committee to Investigate the January 6 Attack on the United States Capitol had just played a phone call of Trump mentioning Freeman by name more than a dozen times in a conversation with Georgia Secretary of State Brad Raffensperger, referring to her as a “professional vote scammer and hustler.” Trump adviser Rudy Giuliani made the baseless claim in a call with state election officials that Freeman and her daughter Shaye Moss, also a poll worker, were passing around USB ports like “vials of heroin or cocaine” as they counted votes in Georgia, a center of Black political power.

“The president of the United States is supposed to represent every American, not to target one, but he targeted me, Lady Ruby, a small business owner, a mother, a proud American citizen who stood up to help Fulton County run an election in the middle of a pandemic,” Freeman continued.

I’ve lost my name, and I lost my reputation. I’ve lost my sense of security. All because a group of people, starting with [Trump], and his ally Rudy Giuliani, decided to scapegoat me and my daughter.

Freeman was advised by the FBI in January to vacate her home of 21 years for safety reasons. She was not able to return for two months. A video circulated widely after the election showed Freeman wearing a T-shirt advertising her namesake women’s boutique. She has one in every color.

“I’ve lost my name, and I lost my reputation,” she continued. “I’ve lost my sense of security. All because a group of people, starting with [Trump], and his ally Rudy Giuliani, decided to scapegoat me and my daughter.”

Freeman and Moss were among a handful of individuals who testified on Tuesday by video or in person during the committee’s fourth public hearing, which focused on Trump’s attempts to overturn election results in the battleground states of Arizona and Georgia. A fifth session is scheduled for Thursday, June 23, at 1 p.m. ET. Rep. Bennie Thompson (D-Miss.), chair of the Jan. 6 select committee, said the panel’s hearings would likely resume after the House returns from recess on July 12.

Raffensperger said once he was doxxed after resisting pressure from Trump to “find” additional votes, supporters of the “Big Lie” sent “sexualized” threats to his wife of more than 40 years. Angry voters broke into the home of his widowed daughter-in-law and her two children. Moss, who was a poll worker for more than a decade, testified that a mob also showed up at her grandmother’s house.

“They just started pushing their way through, claiming that they were coming in to make a citizen’s arrest, that they needed to find me and my mom there, and she was just screaming and didn’t know what to do,” Moss said.

Election workers and secretaries of state who have resisted Trump’s election lie in Georgia, Arizona and elsewhere have faced harassment and threats—and when those individuals are women like Freeman and Moss, as they often are, misogyny is often part of the backlash.

“One of the things that I find most disturbing is how these lies discourage longtime election workers from continuing to do this important work,” Rep. Adam Schiff, a California Democrat, told Moss, before asking her how many of the workers shown in the video weaponized by Trump still work in election administration.

“There is no permanent election worker or supervisor in that video that’s still in there,” Moss responded.

One of those who quit: Moss herself.

About Amanda Becker, The 19th

Amanda Becker is The 19th's Washington correspondent. She has covered the U.S. Congress, the White House and elections for more than a decade. Becker previously worked at Reuters and CQ Roll Call. Her work has appeared in publications including The Washington Post, The New Republic and Glamour magazine. Her political coverage has also been broadcast on National Public Radio. 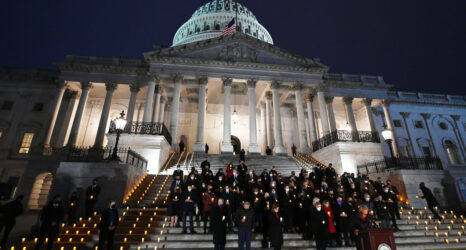