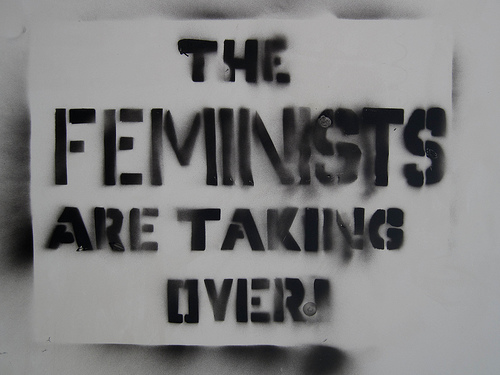 One of the Newsweek 3 has written another great piece on the magazine’s website. Jessica Bennett focuses on the importance of feminism today and discusses the frequent cringes generated by the F word.

Like Bennett,  we’ve all heard the dreaded disclaimer, “I’m not a feminist but…” Fear of the F word, Bennett writes, reflects a misconception, particularly among the younger generation, that equality already exists, thus making feminism obsolete:

All my life, I was told that men and women were equal—so equal, in fact, that it wasn’t even worthy of discussion. Like most of my friends, I outpaced my brothers and many of my male peers by a landslide in school, and took on extracurricular activities by the handful. I’d had it ingrained in me that I could accomplish anything I put my mind to. And I did, without ever embracing the fabled F word, or even learning about it in school.

Only when Bennett and her peers entered the workforce did they get a taste of the inequalities still rampant in the U.S. (let alone the rest of the world)–and that’s why she now fully embraces the F word and all it stands for.

While her real-life experience caused disappointment and frustration and led to her feminist awakening, that sense of equality as she grew up–even if it proved illusory in some ways–was still positive. Until she entered the workforce, she (and friends like her) felt invincible and never questioned pursuing an education and career instead of just a Mrs. degree. She was ingrained with the idea that she deserved as much as men. So when she discovered a work world inconsistent with what she’d been taught, she felt the need to become a stronger–and fully conscious–feminist.

Indeed, schools should teach gender equality by name: It’s called feminism. It’s not a scary word; that’s only what conservative media and 40 years of backlash have made it out to be. And we feminists still have to keep  politely explaining that to our friends, family and colleagues. It’s important, as the Newsweek 3 are doing, to keep spreading and de-scarifying that word, and of course keep fighting for policies that help women achieve equality in every arena of life.

But let’s also take a brief moment to rejoice that young women’s lives have been so formed by feminism that they’ve come to believe equality is a given. That belief can fire them up to make the dream of equality come true.