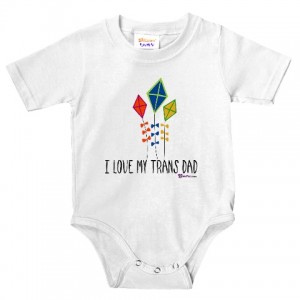 Mother’s Day. Father’s Day. Two days when there is a frenzy of gilt- and guilt-giving in the U.S. for parenting well done or aspiring to be.

Thinking about the ways my American Mexican family’s traditions and cultural influences affected mainstream celebrations, I arrived this year at a decidedly 21st-century question: “How do families celebrate these holidays with transgender parents?”

Gabrielle is a divorced, white, 48-year-old systems engineer and transgender woman living in Fremont, a suburb of San José, California. Her former wife is a public safety worker whose job responsibilities have made it difficult for her to parent their daughter. As a result, Gabrielle is a single parent with custody of their 17-year old daughter.

I had contacted Gabrielle with the idea of learning more about how transgender parents celebrate Mother’s Day/Father’s Day, but I ended up learning much more about one woman’s approach to parenting that is grounded in mutual respect between parent and child.

Gabrielle made the painful decision to delay her gender change for her daughter’s sake. “One of the reasons that I didn’t transition sooner is that my daughter needed a father, a male figure in her life,” she says. “Inasmuch as I so desperately needed to change, she was more important.”

If I could give one bit of advice to someone who is thinking about transitioning, male to female or female to male, think about your obligations with your children first. They really, really need you to be there. At that point in your life, you need to be grownup enough to learn how to sacrifice and put those feelings aside. Be patient because they need you more.

But what about Father’s Day?

Gabrielle points to one way in which her daughter acknowledged and supported her as she transitioned from her male to female self.

“She knew I was really having a hard time with the name-change process. She actually went to court with me, where I had to do a legal petition to change my name. She was there with me.”

A lesson that I carried away from Gabrielle’s story is that if parents are able to communicate their humanity in ways that don’t rely on selfish, guilt-based, manipulative processes, or that aren’t accompanied by threat of punishment, there might be a time when every day, if not every moment, is a non-gender celebration of parenting.

Mother’s Day. Father’s Day. How did these observances get started in the first place?

Some historians say that honoring mothers dates back to festivities which celebrated Cybele, a goddess whose origins are rooted in Greek/Phrygian/Minoan/Mycenean traditions. Accounts have described Cybele’s male worshippers as ritually castrating themselves, dressing in women’s garb and assuming women’s roles, in her honor.

ABOVE: Onesie available at Our Gay Apparel.

María Ochoa is a writer whose most recent books include Russell City: Images of America a pictorial history about a rural, San Francisco Bay Area community and Shout Out: Women of Color Respond to Violence, a collection of writing and visual art that she co-edited with Dr. Barbara K. Ige, which includes work by more than 50 women and girls from around the world. An earlier book of hers is Creative Collectives: Chicana Painters Working in Community. She is also the author of numerous articles and essays. In recognition for her contributions to the arts, the California State Assembly honored her as a Woman of the Year in 1999. Other awards include an artists’ grant from the Creative Work Fund, two Ford Foundation research fellowships, a National Women’s Studies Association prize for her dissertation, and a residency with the UC Humanities Research Institute. Ochoa teaches at San José State University in the Department of Social Science, as well as with Women’s Studies program and the Department of Mexican American Studies. She lives with husband Hayward Mayor Mike Sweeney and four cat family members in a fifty-year old home that increasingly requires repair.