Want a Pizza with That Pap Smear? Oh, and We're Anti-Choice. - Ms. Magazine
Skip to content 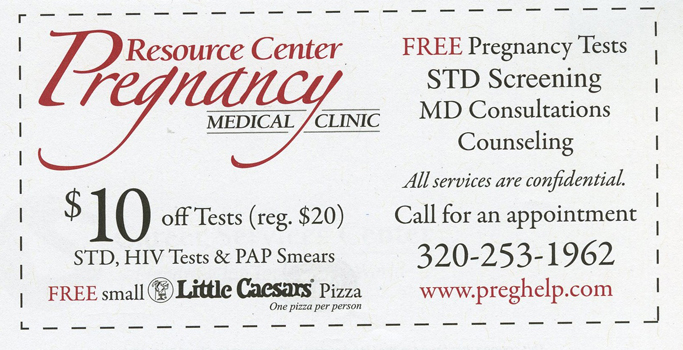 Question: Guess what genius new advertising tactic certain crisis pregnancy centers (CPCs) are using to get women in the door to their fake clinics?

Could it be … listing themselves under “clinics” and “abortion” in the Yellow Pages? No, they’ve been doing that for ages. Could it be CPCs on wheels, you ask? Nope. Already tried that.

The Pregnancy Resource Center of St. Cloud, Minn. has placed a coupon in the back of (my alma mater) St. Cloud State University’s 2010/11 student agenda book shilling a free small Little Caesars Pizza along with $10 STD, HIV and pap tests.

CPCs are using increasingly imaginative advertising techniques in order to preach religious fundamentalist anti-choice politics and lies. Relying on deceptive advertising to get women in the door, CPCs often obscure their religious ties. The St. Cloud center’s website, preghelp.com cites no mention of the center’s religious orientation. However, a visit to the Pregnancy Resource Center of St. Cloud yields religious anti-choice brochures and questions about patients’ religions.

For a class project last year, SCSU women’s studies students visited the Pregnancy Resource Center to see what information and services it gives women. After describing all the symptoms of pregnancy that are listed on their own website, including late period, nausea, and breast tenderness, one student was denied a pregnancy test–which, had she been pregnant, would have prolonged her pregnancy, making it harder after a certain point to obtain an abortion.

Because CPCs masquerade as “medical clinics,” many women are fooled by the professional-looking facade and think they are getting honest answers. Apparently now, the Pregnancy Resource Center is throwing professional to the wind in favor of greasy cheesy carbs. Are they trying to lure fiending pregnant women to their anti-abortion lair? Maybe they should try free pickles and ice cream.

Fortunately, the Feminist Majority Foundation’s campus group wants to expose CPCs for what they really are.

Send a message to your legislator to support legislation fighting false advertising and federal funding for CPCs here. 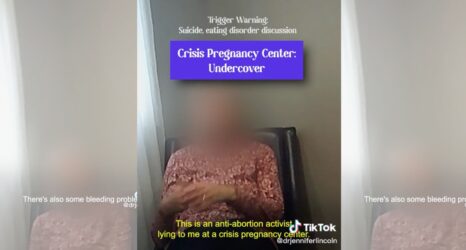