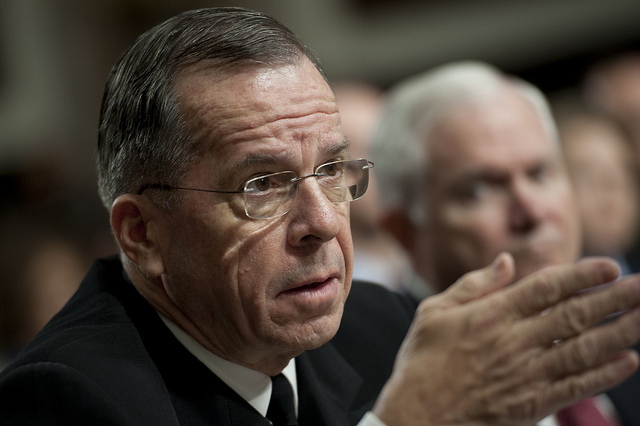 The big story this week that held feminists’ rapt attention was the progress of the Senate hearings on the U.S. military’s “don’t ask, don’t tell” policy. The hearings coincided with the Pentagon’s release of its survey on military personnel’s reaction to possibly lifting the 17-year-old ban on gay servicemembers. This weekend, Ms. points you to the best coverage of all things DADT from across the web.

The week at least started out with some good news: Women’s eNews reported that Major Margaret Witt, a decorated flight nurse who was dismissed under DADT after becoming the first openly gay person to serve in the military due to a court order invalidating the Clinton-era policy, will be able to resume her service with the U.S. Air Force.

Another small but encouraging step was taken in Illinois, when on Tuesday the State House voted to allow civil unions for both same-sex as well as straight couples. The legislation passed in the Senate the following day.

Despite some bright spots early in the week, the Senate hearings on DADT didn’t give us reason to celebrate. The folks at Pam’s House Blend filled us in on what was happening behind-the-scenes and contextualized the proceedings with their excellent and thorough week-long coverage. Just about anything you might have missed can be found here, here, here and here.

During the Senate hearings, it became clear that the policy should be changed. Unfortunately, as the ranking Republican on the Senate Armed Services Committee, Sen. John McCain (R-Az.) stood firmly in the way. McCain seems to have decided to go all-in opposing a repeal. Now that recommendations from the Pentagon’s study and military leaders have made all of McCain’s previous conditions for considering repeal of DADT obsolete, McCain has had to wing it. He’s not the best at improv. Check out Jon Stewart’s take, with some added analysis from Jezebel.

The Atlantic‘s James Fallows marvels at what he calls the incredible crabbedness–emphasis on the incredible–of John McCain’s role at the DADT hearings, and seeks to understand the senator’s mysterious transformation, asserting that “John McCain seems intentionally to be shrinking his audience, his base and his standing in history. It’s unnecessary, and it is sad.” McCain’s stance also earned him the title role at Salon’s “This Week in Crazy”.

Sen. McCain isn’t the only Republican who’s doubling down against repeal. Over at TAPPED, Nancy Goldstein made a convincing (wink wink) case that Sen. Lindsey Graham’s reason for opposing a repeal of DADT was a “touching embrace of lesbian feminist collective politics: The soldier-who-respects-the-chain-of-command-and-does-what-he’s-told is now concerned that too few soldiers got to express their feelings.” Of course this wouldn’t be the first time Lindsey Graham was likened to a lesbian.

Lest we get too focused on the battle to overturn DADT, Carrie Polansky reminds us that repealing the policy won’t be the final battle for LGBTQ service members. She explains why at Gender Across Borders.

Speaking of who should and should not be allowed to serve in the military, Tracy Clark-Flory reports that Britain has renewed its ban on women in armed combat. Although a new report from Britain’s Ministry of Defense found that “women are fundamental to the operational effectiveness of the UK Armed Forces, bringing talent and skills across the board,” the report concluded that allowing women to serve in the UK Armed Forces–which, by the way, welcomes openly gay service members–might undermine “group cohesion,” leading to “far-reaching and grave consequences.” It’s funny how the same unfounded fears can lead to such different discriminatory policies in different parts of the world, isn’t it?