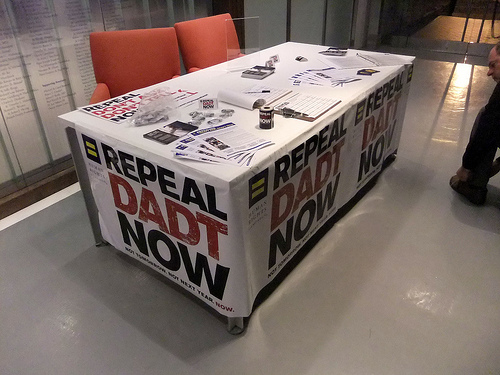 We now have decisive action from Congress in its long-awaited repeal of Don’t Ask, Don’t Tell. But what many don’t realize is that repealing this 1993 law moves us ahead in our thinking while actually moving us backward in our military practice.

Before World War I, the U.S. had no legal restriction against homosexuals in the military–it was left to the discretion of commanding officers whether to enforce any unofficial policy. Homosexuality–along with sodomy involving an opposite-sex partner–wasn’t officially banned until 1950, in the Uniform Code of Military Justice.

Bill Clinton’s policy–Don’t Ask, Don’t Tell, Don’t Pursue (but many leave that last, perhaps most important piece, out of the discussion)–was an attempt to end affirmative efforts by the military to seek out and identify gay, lesbian and bisexual people in the services. In other words, although homosexual conduct was still considered “incompatible” with military service, the new policy was supposed to end witch hunts, and recruits were no longer asked if they were gay.

Unfortunately we have evidence that this was not successful: Discharges of gay personnel increased both absolutely and as a percentage of the armed forces. Plus, women have been disproportionately targeted, with discharges running at a rate roughly three times their presence in the military. And women in the service continue to be coerced into unwanted sexual liaisons with the threat of being accused of being lesbian if they refuse.

Just as DADT didn’t end problems with anti-gay discrimination in the armed forces, its repeal will require the military to meaningfully address an ethos that emphasizes a masculine-warrior paradigm, which is in conflict with an evolving model of culture that seeks to decrease the prevalence of sexual assault, sexual harassment and gay-bashing. For the repeal to really work, the military will have to alter its hyper-masculine culture, which renders masculinity and sexuality so inextricably entwined that gays, lesbians and straight women remain exceedingly vulnerable to discharge and harassment.

That means senior military commanders will have to hold their subordinates accountable for effectively instituting the everyday cultural climate-control measures that will be needed to root out elements of discrimination against gays in the military. The repeal of DADT should bring forth those aspects of military leadership we most celebrate with pride and ownership: swift and decisive action designed to ensure the protection of all Americans. As an enlisted officer noted in speaking with columnist Roland Martin of CNN,

The troops are ready for something like this. … They are well led. We know that if there is a change, then that change will have to be led, and it’s going to have to be led by senior leaders such as myself and–and others across the battlefield.

A Pentagon report on the potential impact of repeal issued in late November pointed out that successful implementation would hinge in large part on leadership by commanders, who would be responsible for communicating a clear message to the ranks about the changes in policy.

This is the most important point for all of us to remember about this long-awaited Congressional action: The institutional climate of the military will always be determined by its rigidly hierarchical chain of command. Thus, the key to effectively enforcing the repeal of  “Don’t Ask, Don’t Tell, Don’t Pursue” is to ensure that the changes to be made occur with the leadership first, and then move swiftly, with more than all deliberate speed, from the top down to the ranks of the newly enlisted.

Commanders no longer have the discretion to discharge gay and lesbian servicemembers–but they do need to exercise considerable discretion in making a non-discriminatory military work.