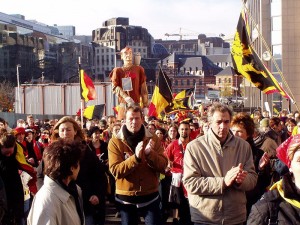 A sex strike recently proposed in Belgium has ignited a debate about the efficacy of sex strikes.

Proposed by parliament member Marleen Temmerman, the strike would be intended to break the eight-month political deadlock caused by a feuding Dutch-speaking North and French-speaking South. Though half-joking in her suggestion for spouses to withhold sex until their partners reached a consensus, women in Israel, Sudan, Liberia, Kenya, Italy, Turkey and Colombia have all staged sex strikes, often successfully. Such strikes formed Kenya’s government, dramatically reduced crime rates in gang-riddled neighborhoods and fixed a water system in a Turkish village where women had to wait hours at a well before walking several miles home.

But the gender politics of sex strikes are always controversial. Critics feel they reinforce stereotypes of men as sex-crazed and a woman’s body as being her most valuable asset. Proponents argue that sex and sexuality are powerful tools and that all people use their natural assets, be it athleticism, an operatic voice or a way with words.

The significance of this issue, however, is less about sex and more about female solidarity. In a world where sex and sexuality are used by corporations, advertisers and patriarchal governments to control and manipulate women, at least sex strikes involve women themselves deciding if and how to use their sexuality. And in a culture saturated with films like Mean Girls and shows like The Bachelor or Gossip Girl, which portray women as backstabbing and competitive by nature, sex strikes remind us of how powerful we can be when we stand together.

What American women haven’t seemed to fully grasped, however, is that our real power is financial more than sexual: Women in the U.S. account for 85 percent of all consumer purchases. As of 2007, women 50 and older had a net worth of $19 trillion and owned more than three-fourths of the nation’s wealth.

One of the best examples of female buying power was the 1989 Alar scare, when a chemical coating apples was thought to be a dangerous carcinogen. A 60 Minutes expose, followed by a public demand for a ban by Meryl Streep and moms across the country using phones and door-to-door petitions and refusing to buy apples or apple juice brought about results. Schools returned crates of apples and supermarkets stopped stocking them. Apple prices dropped sharply and 20,000 apple growers suffered financial harm. Soon after, the government banned certain chemicals and increased oversight, while growers implemented new spraying techniques and reduced harsh chemical usage.

Yet very few large-scale, women-driven boycotts have been staged since. Numerous women took issue with Bratz dolls, whose exaggeratedly plump lips, heavy eyeliner, fishnets and bare midriffs give them the appearance of shrunken prostitutes. Mommies blogged and some petitioned, yet even with the power of the internet and social media to instantly unite and mobilize (let alone our increased buying power), there was never an orchestrated outcry that impacted Bratz’s bottom line.

There are, of course, other factors for this lack of large-scale agency: Sexualization is a more subtle and less immediate perceived threat than cancer scares; kids don’t harass overworked parents for apples as they do for popular toys; and no celebrity spokesperson or activist with time and money has spearheaded such a movement. Nonetheless, the only reason Bratz dolls were discontinued in 2008 was that they lost a copyright suit to Mattel. By 2010, they were back on shelves in all their whorish glory.

While women have always had the power to withhold sex, the power to withhold money is far newer. Seeing ourselves as financially powerful is a notion in its historic infancy. When my grandmother divorced my grandfather in 1975, she couldn’t get a credit card in her own name without his signature, and it’s only within the last 40 years that women joined the work force en masse (at least when there wasn’t a world war going on).

Today, American women hold the purse strings and dominate the Internet. If we’re going to use what’s unique to our gender to affect change, why deny ourselves pleasure when we have words and wherewithal? All we need is the will. The day we decide to share power strategies as willingly as we share beauty and mothering tips is the day we’ll start effecting change. Because in a free-market economy–in theory and practice–nothing matters as much as money. Not even sex.

Photo of a 2007 strike in Belgium courtesy of Wikimedia Commons.