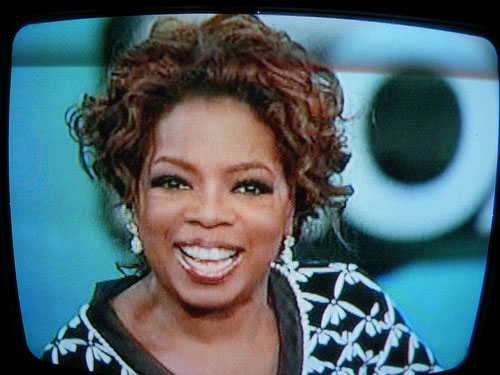 When Beyonce launched into her latest faux girl-power anthem “Run the World (Girls)” to honor Oprah Winfrey on Monday afternoon, the moment crystallized what both the talk show and its hostess have been to television: 25 years of paradox.

On the one hand, no one’s been a bigger proponent of real “girl power” than Oprah herself, a self-made billionaire and cultural icon. Ever since she shifted 15 years ago from the highly criticized tabloid talk show genre to engage more directly with social and global concerns, her show has highlighted significant and often taboo women’s issues: incest, rape, domestic violence, addiction, sexuality, depression, disability and financial woes. She not only brought these into people’s homes and made them water-cooler conversation, but also steered our attention towards global poverty, health care and, with her focus on spirit, a whole lot of New Age self-help.

On the other hand, even as Winfrey has inspired women to overcome discriminatory obstacles, she at times has been as guilty as Beyonce in promoting an empowerment-lite that ignores political reality in favor of feel-good celebration (see video blogger Nineteen Percent’s expert deconstruction of “run the world-lies”). Of course she was as smart as a whip in figuring out how to couch much of the real empowerment in-between episodes that focused on the lives of celebrities, weight management (including her own), beauty and fashion make-overs, home decoration, adventure and other non-threatening staples that appealed to her audience of, on average, middle-class white females, age 55, with liberal politics.

She worked within a successful template that, as Wesleyan University anthropologist (and expert in television storytelling) Elizabeth Traube explains, “blended ‘high’ and ‘low’ cultural forms descended from different class-cultural traditions.” It’s especially noteworthy that she maintained her largest audience among white women, while remaining a contradictory figure among black viewers, who made up just 17 percent of her viewership. Newsweek even asks if her new network, OWN, is “too white.”

It is very much a love-hate that has changed in nature over the years. She has been quietly the black kingmaker in a sense. Look what she did for Toni Morrison who had not been on the best-seller list despite her critical acclaim. Or even Maya Angelou, Iyanla [Van Zant], Tyler Perry, Morehouse, Carol’s daughter and others–especially Barack Obama.

Some black critics consider her barrier-breaking achievements in a predominantly white domain to be the result of her mammification. But others have understood that she not only must navigate the media world but cater to her target audience in order to keep her high ratings (14 million at its peak, then down to 7.4 million, still making it the highest-ranked U.S. talk show).

Winfrey’s approach was less about changing the system than in encouraging viewers to change themselves. After all, she did it, overcoming her severely constrained Mississippi beginnings to become the first black female billionaire! She has thus been embraced as a model of black exceptionalism, but a virtual BFF as well.

That she is one of the most influential women of all time is no secret, and the incongruities of her influence are many. Indeed, for all of her work on behalf of women, Price says, “Oprah herself is as imbued with contradictions in relation to feminism as Beyonce.” Joshunda Sanders and Diana Barnes-Brown highlight some of these tensions in their essay, Eat, Pray, Spend:

much of Winfrey’s advice actually moves women away from political, economic, and emotional agency by promoting materialism and dependency masked as empowerment, with evangelical zeal.

Here’s another paradox: The Oprah Effect, as it is known, moves items off shelves with a rush, whether they’re books, bras or jeans, making her a mighty corporate shill. Then again, she has also spearheaded the Oprah Angel Network, which has donated $80 million to philanthropic ventures, including hundreds of scholarships. She has done well AND done good.

Her brand of self-actualization through introspection and public atonement–“rooted in the true-confession magazine genre,” according to Traube–has been infectious. And in her final hour Wednesday, she expressed sincere gratitude to her audience, recounting what she has learned along the way and encouraging her devoted viewers to live with passion and answer their calling:

A calling … lights you up and it lets you know that you are exactly where you’re supposed to be, doing exactly what you’re supposed to be doing. And that is what I want for all of you and hope that you will take from this show. To live from the heart of yourself. You have to make a living; I understand that. But you also have to know what sparks the light in you so that you, in your own way, can illuminate the world.

This final show was all about personal growth, rather than the conspicuous materialism that has too often been Oprah’s signature. In fact, she reflected on unworthiness as the root cause and common thread that runs through all of us, claiming that things won’t make anyone feel worthy:

What I got was we often block our own blessings because we don’t feel inherently good enough or smart enough or pretty enough or worthy enough. From Jacqui Saburido—her face literally melted by the flames ignited from a car accident with a drunk driver—to Monica George—remember her? The mother with a young daughter and a brand new baby who lost both her arms and both legs—the show has taught me you’re worthy because you are born and because you are here. Your being here, your being alive makes worthiness your birthright. You alone are enough.

For all the complexities she embodies and the contradictions that she will always represent, it was very clear that in the last 25 years, Oprah herself has changed. She has come a long way. And she’ll definitely leave much of her fanbase with Empty Oprah Syndrome.