Fighting for Justice on Campus - Ms. Magazine
Skip to content 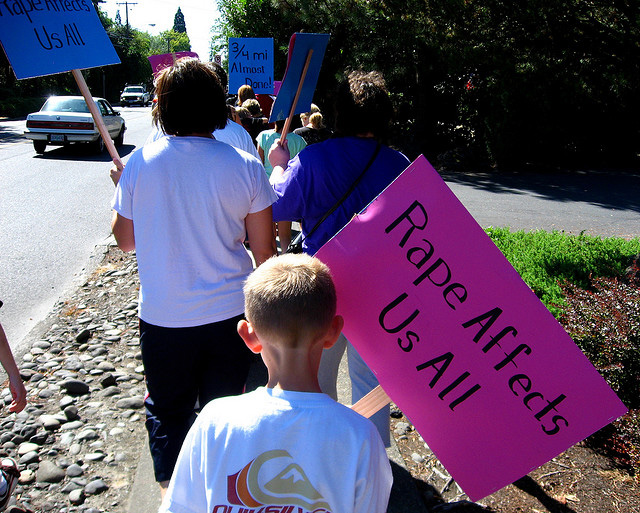 I was working as a Resident Assistant and taking classes during my junior year of college. One of the residents in the building was a close friend of mine who had recently been dealing with a death in the family and a breakup with a girlfriend. He asked to come to my room to discuss his issues, and I agreed.

I had previously performed consensual oral sex on him multiple times, and did so again on this night. We talked for a while and then things became sexual again and we decided together to have vaginal intercourse. During this process, he flipped me over onto my stomach and tried to insert his penis anally. I refused and he continued vaginally.

After some time he tried to insert anally again and I said no. At this point he pushed down on my shoulders and inserted anally anyways. I repeatedly yelled for him to stop because he was hurting me and eventually started screaming and crying. After he finished he got up and told me that if I told anybody about what happened, I would get in trouble because of my position as a Resident Assistant (sleeping with residents is against the rules).

Originally I didn’t plan on telling anyone so I took a long shower, but when I saw how much I was bleeding, I exited and contacted a friend who worked with a sexual assault hotline in our town. She got me in contact with their organization and the school police came, took a story and escorted me to the hospital for a rape kit.

I decided not to press charges because he was good friends with many of my good friends, and I figured the university would deal with it. Eventually the matter came to a University Board Hearing over the summer. Two police officers testified on my behalf stating that the physical evidence was consistent with my story and that the accused had changed his version of events many times.

When I tried to fight the bans placed against me, I was told by the Vice-Chancellor of the University that the results of the hearing meant that “we (myself and the accused) were equally responsible for the events that happened that night” and that “I shouldn’t have sex if I’m not ready to accept the consequences.” I then tried to press charges with the police, since I realized the school wouldn’t do anything. I was told by an Assistant DA that I shouldn’t press charges because it would be too hard to prove. He also claimed that my cases wouldn’t even be considered “rape” because it was anal, and we would be lucky to even charge him with a misdemeanor.

I gave up and dealt with my school year by avoiding him as much as possible. I graduated in May 2011.

Many rape survivors find themselves in similar situations, never seeing justice for the crime committed against them. The FBI’s archaic definition is part of the problem.