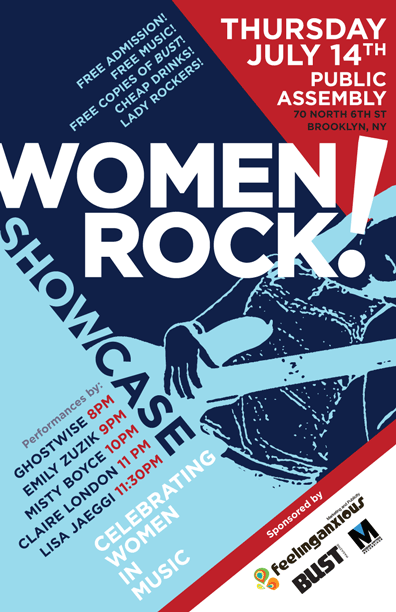 Ms.’s weekly events post has been on a hiatus lately, but never fear–it’s back! The week ahead offers lots of opportunities to get your feminist art fix.

New Jersey: Original posters dating back to the 1980s and new artwork by the legendary Guerilla Girls will be on display at the Mason Gross School of Art Galleries. Don’t miss the opportunity to see the feminist masked avengers’ work. Through July 15, Mason Gross School of the Arts Galleries, 33 Livingston Avenue, New Brunswick, NJ 08901

Los Angeles: Outfest continues its panels, discussions and screenings of a huge variety of LGBTQ-oriented films. See website for venues.

With approximately 50 pieces of work from some of the most up-and-coming women street artists on the scene, Miss Danger on the Loose at LAB ART promises to be an awesome feminist answer to the MOCA’s male-dominated Art in the Streets exhibition. July 14, 217 South La Brea, Los Angeles, CA, 90036

Come see some of LA’s best drag performers this Saturday in the “All That Drag” production, sponsored by the Minority Aids Project of Los Angeles. All proceeds from this sure-to-be fabulous show will benefit organizations dedicated to fighting HIV/AIDS. July 16, 6:30pm, 4800 Hollywood Blvd. Los Angeles, CA 90027

London: Catch the last week of I’s, Shes, Hers and Ours, in which 73 international feminists unite to critique patriarchy through art at The Gallery. Follow @73women on Twitter for updates. Through July 23, The Gallery, Edward’s Lane, N16 0JJ, London

Miami: Over 1,300 people, including several of our friends here at FMF and Ms., will be attending Sister Song’s 2011 “Let’s Talk About Sex!” Conference this week. The event includes workshops and discussions aiming to strengthen the fight for reproductive justice by amplifying the voices of women of color. Visit www.SisterSong.net for more information. July 13-16, Eden Roc Renaissance Miami Beach, 4525 Collins Ave, Miami Beach, FL 33140

Renton, Wash., and nationwide: “The Help” is a New York Times bestseller-turned-film about women and class in the 1960s, and the ability to create social change. The film will officially hit theaters in August of this year and is beginning public screenings. Check out one in Renton, WA this week and keep your eyes peeled for similar events nationwide.

If you’re in New York but are looking for a less-musical feminist experience this Thursday, join NAMI-NYC Metro, bestselling author Harriet Brown and award-winning filmmaker Jesse Epstein for a (free!) discussion exploring the eating disorders and the invention of the “ideal body”. To RSVP, call the NAMI Helpline at 212.684.3264; July 14, 550 1st Ave, New York, NY 10016

St. Louis: SlutWalk, the march against victim-blaming, is coming to St. Louis! RSVP to the event on Facebook here, and follow the event’s Twitter for updates. July 16,  Manchester Ave, St Louis, MO 63110

Cockeysville, Md.: Reproductive rights advocates will gather this Sunday to celebrate and remember the life and work of murdered abortion provider Dr. George Tiller. The event will include a screening of the Rachel Maddow documentary “The Assassination of Dr. Tiller” and a discussion about the moral and legal issues surrounding clinic violence. Email [email protected]​ail.com to RSVP and check out the Facebook event for more information. July 17, RSVP for location details.

Know of an awesome feminist event this week that we missed? Post it in the comments! If you know of any events in the next several weeks that you think should be featured, email me, Kari, at [email protected]