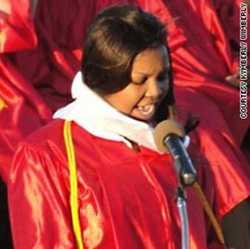 For most high school students in the U.S., balancing academics, college applications, extracurricular activities, sports, part-time jobs and commitments to friends and family can be a big challenge. But for teen mothers, the responsibilities of parenthood create even more strain. Earning straight A’s is no small feat for anyone, but for a student also charged with caring for an infant, it’s a tremendous accomplishment.

That’s precisely what Kymberly Wimberly, a high school student from McGehee, Ark., managed to do.

When she got pregnant in her junior year, Wimberly missed only three weeks of school and returned in time for finals. In her senior year, she took a full load of Advanced Placement courses, worked through the long hours and intense coursework and ended the year with straight A’s, earning her the title of valedictorian of her class at McGehee High School.

Yet, despite the fact that her GPA was definitively the highest in her class, school officials apparently weren’t satisfied. Her mother, Molly Bratton, who works at the high school, overheard school officials calling Wimberly’s accomplishments “a big mess,” and the day after she was declared valedictorian, the school’s principal announced that Wimberly would in fact have to share the title with the runner-up, a white student whose GPA was lower than hers. Bratton believes this move–unprecedented in the school’s history–may have been made in order to avoid having a single black mother honored as the best in the class.

Bratton has filed a lawsuit against the high school and Principal Darrell Thompson for discriminating against Wimberly on the basis of race. The suit also alleges that school officials discourage black students from taking AP courses by telling them that the classes are too difficult.

Arkansas is no stranger to racial tensions playing out in schools. Little Rock was the site of the infamous desegregation battles in the years that followed the Supreme Court’s 1954 Brown v. Board of Education decision, during which the “Little Rock Nine” took the historic step of integrating the city’s Central High School in 1957.

Fifty-four years later, the “separate but equal” mentality seems to persist in the town of McGehee. As Wimberly described it,

Black students are meant to stay in regular course levels and mostly play sports, that’s what we’re good at, that that’s what we should stick to–that’s the mentality of McGehee.

In the face of this attitude, as well as the grueling responsibilities of motherhood, Wimberly rose to the top of her class. She deserves the same accolades that have been afforded to every other first-in-class student in the school’s history. Sign this petition to tell the McGehee School District to give Wimberly (and Wimberly alone) the honor she earned.