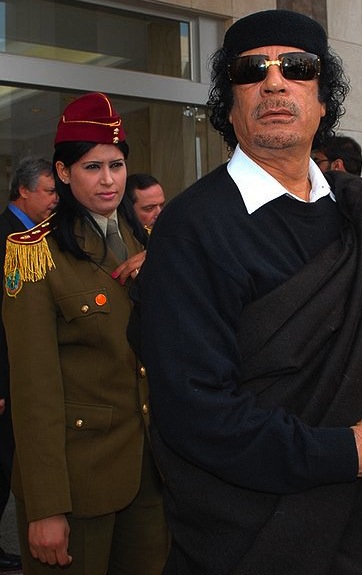 The Washington Post reports that five of Col. Moammar Gaddafi’s female bodyguards have come forward to say that they were systematically raped and abused by the now fugitive Libyan leader, his sons and other members of the regime. Since the 1970s, Gaddafi has maintained an elite team of about 30 women, known as his Amazonian guard. The women of this fabled cadre have long been a visible element of Gaddafi’s eccentric and mysterious entourage, but the recent revelations of sexual violence and coercion against the guard members controvert any illusion of glamor.

Amanda Marcotte points out the troubling trend of media outlets using photos of heavily pregnant women to illustrate stories about first trimester abortions, especially those about recently-passed sonogram laws. This is misleading, since the vast majority of women getting abortions are not yet showing. Marcotte suggests alternatives:

Abortion is a complicated issue! It involves medical science, leering Republicans, crazy anti-choicers, determined feminists, the court system, you name it. There are pictures of all of these things! Use those instead.

ABC’s Nightline aired a great segment on a pioneering generation of transgender kids.

News that Venus Williams was dropping out of the U.S. Open this week due to recently-diagnosed Sjögren’s syndrome prompted a discussion of the fact that women are three times as likely as men to be diagnosed with autoimmune diseases. Though no one knows for certain what’s behind the gender disparity, Slate explains the most popular theories to date.

Campus Progress reported on the latest incident in a chilling trend of transphobic violence in Washington, D.C., much of it at the hands of police.

At Racialicious, Joseph Lamour breaks down the ongoing Vogue Italia “Slave Earring” debacle. Two weeks ago, Vogue Italia put up a “shop the trend” post on slave-inspired jewelry, in this context:

If the name brings to the mind the decorative traditions of the women of colour who were brought to the southern United States during the slave trade, the latest interpretation is pure freedom. Colored stones, symbolic pendants and multiple spheres. And the evolution goes on.

Unsurprisingly, this sparked a whole lot of outrage. Faced with Internet-wide condemnation, the magazine’s editor released this statement:

We apologise for the inconvenience. It is a matter of really bad translation from Italian into English. The Italian word, which defines those kind of earrings, should instead be translated into ‘ethnical style earrings.’ Again, we are sorry about this mistake which we have just amended in the website.

But that wasn’t the end of the saga–check out Lamour’s piece for a breakdown of why a mistranslation is unlikely, plus other great analysis.

ABOVE: Muammar al-Gaddafi and a member of his all-female bodyguard squad in 2009. Photo from Wikimedia Commons.