Woman is the “N” of the World? - Ms. Magazine
Skip to content

In 1969, Yoko Ono coined the phrase, and I quote, “Woman is the N****R of the World.” Shortly thereafter, she and her husband, the late John Lennon, wrote and he recorded a song with that same title.

According to Wikipedia (which is ALWAYS questionable), at that time (don’t know where they would stand today) Dick Gregory and Ron Dellums defended the song.

Several Black feminists, including Pearl Cleage, challenged Yoko Ono’s racist (to Black women) statement. “If Woman is the “N” of the World, what does that make Black Women, the “N, N” of the World?”

Fast forward 42-years later from when it was originally coined, and a White woman decides to create and carry a placard of the quote to SlutWalk NYC. 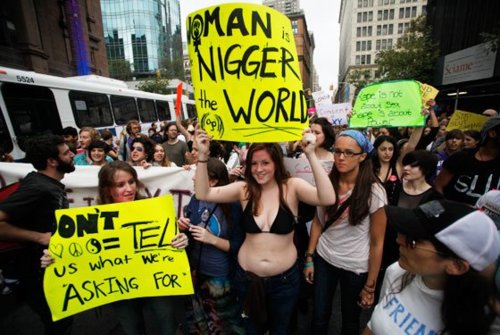 I’ve been informed that one of the (Black) women SlutWalk NYC organizers asked the woman to take her placard down. She did. However, not before there were many photographs taken.

My question is, Why did it take a Black woman organizer to ask her to take it down? What about all of the White women captured in this photograph? They didn’t find this sign offensive? Paraphrasing Sojourner Truth, “Ain’t I A Woman (too!)?”

ERADICATING RACISM SHOULD NOT BE THE SOLE RESPONSIBILITY OF PEOPLE OF COLOR.

How can so many White feminists be absolutely clear about the responsibility of ALL MEN TO END heterosexual violence perpetrated against women, and yet turn a blind eye to THEIR RESPONSIBILITY TO END racism?

Is Sisterhood Global? This picture says NO! very loudly and very clearly.

The fact that this quote originates from a woman of color, Yoko Ono, really underscores the work that we women of color must do to educate each other about our respective herstories. This photograph also underscores the imperative need for hardcore inter-racial dialogues among all of us in these complicated movements to address gender-based violence in all of our non-monolithic communities.

Co-signing with my Sister Andrea Plaid that at the fundamental level this photograph speaks to the very sobering reality that there is a level of acceptable racism going on within (some?) SlutWalkS (not a monolith).

There is something deeply uncanny that, in 2011, this White woman would think it was OK to create and carry a sigh with the “N” word at a SlutWalk. What on earth was she thinking? Who in the United States of Ameri-KKK-a doesn’t know that the “N” word is NOT okay to use, most especially if you’re not Black.

POSTSCRIPT: I have supported and still support the premise of SlutWalks. In August I participated as a speaker at SlutWalk Philly.

I discuss the reasons why I, as a Black feminist lesbian incest and rape survivor, have supported the premise of SlutWalks in fairly great detail in my September 30 interview with Where Is Your Line?

Clearly there is an urgent and non-negotiable need for dialogues to happen in the immediate future.

UPDATE: Kimberlynn Acevedo, one of SlutWalk NYC’s organizers has posted a statement in response to the sign, and has announced plans to continue the dialogue. Here is an excerpt:

One of our march’s participants last Saturday held up and promulgated a racist, offensive sign. She was asked to take it down by one of our organizers as soon as it came to our attention. This sign symbolizes many of the critiques about SlutWalk not being a safe space for people of color, in particular Black women. We are taking it seriously and we absolutely condemn it and are horrified by it. This sign opposes the mission of SlutWalk NYC and its message is in direct conflict with the beliefs of its organizers. …

We are meeting with many of the groups which have critiqued SlutWalk NYC directly. We are meeting with Black Women’s Blueprint. We are attending an open meeting with Sister Song. We are holding a completely open meeting on October 13 at Walker Stage from 6-8 p.m. in order to discuss how to build a fighting movement. Further, we encourage everyone to take a look at the transcripts and videos of the speeches we have posted on our website and Facebook. We know we need to grow. We have been working on growth from the beginning. There were powerful, diverse and engaging speeches at the rally, many of which directly hit upon critiques of SlutWalk. THESE are the seeds of growth in our organization. We want to start a movement that passionately wants include the voices of all people, of all survivors, of all individuals who see merit in what it is that we are choosing to combat.

We hope you will join us.